The Whitehead No.21 was the aircraft that aviation pioneer Gustave Whitehead claimed to have flown near Bridgeport, Connecticut on August 14, 1901. Professional aviation historians and scholars reject claims for the flight. A description and photographs of Whitehead's aircraft appeared in Scientific American in June 1901,[1] stating that the "novel flying machine" had just been completed, and "is now ready for preliminary trials". The flight was reported in the August 18, 1901, issue of the Bridgeport Sunday Herald and reprints or rewrites were published in many other newspapers.[2]

Photographs exist showing the aircraft on the ground,[1] but there are no photographs known of the aircraft in flight. The No.21 was a monoplane powered by two engines—one for the wheels during the ground run, the other for driving the propellers in flight. 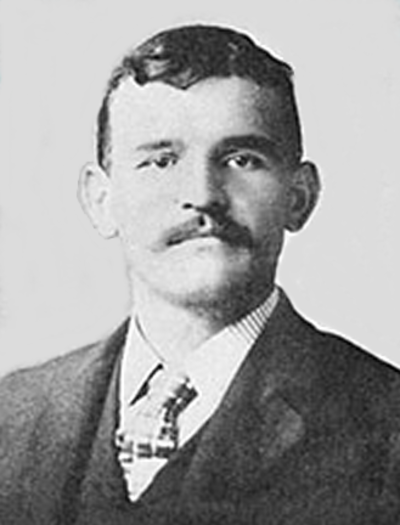 Gustave Albin Whitehead was an aviation pioneer who emigrated from Germany to the United States where he designed and built gliders, flying machines, and engines between 1897 and 1915. Controversy surrounds published accounts and Whitehead's own claims that he flew a powered machine successfully several times in 1901 and 1902, predating the first flights by the Wright Brothers in 1903.

Bridgeport is the most populous city and a major port in the U.S. state of Connecticut. With a population of 148,654 in 2020, it is also the fifth-most populous in New England. Located in eastern Fairfield County at the mouth of the Pequonnock River on Long Island Sound, it is 60 miles (97 km) from Manhattan and 40 miles (64 km) from The Bronx. It is bordered by the towns of Trumbull to the north, Fairfield to the west, and Stratford to the east. Bridgeport and other towns in Fairfield County make up the Bridgeport-Stamford-Norwalk-Danbury metropolitan statistical area, the second largest metropolitan area in Connecticut. The Bridgeport-Stamford-Norwalk-Danbury metropolis forms part of the New York metropolitan area. 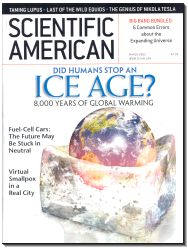 Scientific American, informally abbreviated SciAm or sometimes SA, is an American popular science magazine. Many famous scientists, including Albert Einstein and Nikola Tesla, have contributed articles to it. In print since 1845, it is the oldest continuously published magazine in the United States. Scientific American is owned by Springer Nature, which in turn is a subsidiary of Holtzbrinck Publishing Group.

A monoplane is a fixed-wing aircraft configuration with a single mainplane, in contrast to a biplane or other types of multiplanes, which have multiple planes.

The No.21 was a wire-braced monoplane with bat-like wings and triangular horizontal tail. There was no vertical fin, and lateral control was intended to be accomplished by shifting the pilot's body sideways.[3]

The wings were constructed with radial bamboo ribs and covered with silk, and had a span of 36 ft (11 m). They had some dihedral when opened out to the flying position.

The fuselage was of rectangular box section with constant height, curved to taper inwards at front and rear when seen from above. Four small wheels were fixed to the bottom.

An analysis in 1980 concluded that the design as a whole was flimsy and aerodynamically unsound.[4]

Although having two engines and twin propellers, the aircraft was not a conventional twin. It had separate engines for ground running and flight, both designed and made by Whitehead. The ground engine was of 10 hp (7.5 kW) and drove the wheels to reach takeoff speed. Propulsion was then changed to a 20 hp (15 kW) acetylene engine driving two counter-rotating tractor propellers mounted on outriggers.[5] The aircraft was intended to take off under its own power and without assistance.

A description and photographs of Whitehead's aircraft appeared in Scientific American in June 1901,[1] stating that the "novel flying machine" had just been completed, and "is now ready for preliminary trials." The article included photographs showing the aircraft on the ground. 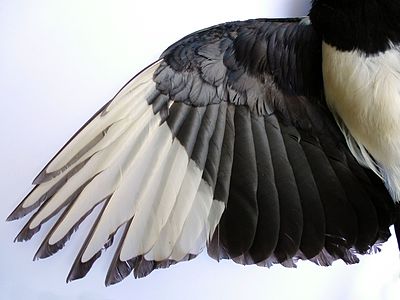 A wing is a type of fin that produces lift while moving through air or some other fluid. Accordingly, wings have streamlined cross-sections that are subject to aerodynamic forces and act as airfoils. A wing's aerodynamic efficiency is expressed as its lift-to-drag ratio. The lift a wing generates at a given speed and angle of attack can be one to two orders of magnitude greater than the total drag on the wing. A high lift-to-drag ratio requires a significantly smaller thrust to propel the wings through the air at sufficient lift.

In aeronautics, dihedral is the angle between the left and right wings of an aircraft. "Dihedral" is also used to describe the effect of sideslip on the rolling of the aircraft.

Takeoff is the phase of flight in which an aerospace vehicle leaves the ground and becomes airborne. For aircraft traveling vertically, this is known as liftoff.

Counter-rotating propellers, also referred to as CRP, are propellers which spin in opposite directions to each other. They are used on some twin- and multi-engine propeller-driven aircraft.

Scientific American, informally abbreviated SciAm or sometimes SA, is an American popular science magazine. Many famous scientists, including Albert Einstein and Nikola Tesla, have contributed articles to it. In print since 1845, it is the oldest continuously published magazine in the United States. Scientific American is owned by Springer Nature, which in turn is a subsidiary of Holtzbrinck Publishing Group.

A minority of commentators claim that the No. 21 flew, but the majority of historians reject these claims.

Whitehead was quoted in a July 26 article in the Minneapolis Journal, credited to the New York Sun, in which he described the first two trial flights of his machine on May 3. Andrew Cellie and Daniel Varovi were mentioned as his financial backers who also assisted in the trial flights. The machine was unmanned and carried 220 pounds (100 kilograms) of sand as ballast and flew to an altitude of 40 to 50 feet (12 to 15 m) for an 1/8 of a mile (200 m). According to Whitehead, the machine flew a distance of 1/2 mile (790 m) during its second test flight for one and one-half minutes before crashing into a tree. He also explained his desire to keep the location of any future experiments hidden to avoid drawing a crowd who might make a "snap-shot verdict of failure".[2]

Drawing in the Bridgeport Herald of No.21 aloft.

In an article in the August 18, 1901, issue of the Bridgeport Sunday Herald a reporter states that he witnessed a night test of the machine, at first unpiloted and loaded with sand bags, and later with Whitehead at the controls. The story was reprinted in the New York Herald, the Boston Transcript and the Washington Times, which ran it on August 23, 1901. Within months, the story ran in nine other newspapers in all parts of the country, as far away as California and Arizona.[2] A drawing of the aircraft in flight accompanied the Sunday Herald article.

According to Whitehead and a reporter who claimed to have witnessed the event, the monoplane's longest flight was 200 feet (61 m) above ground for one-half mile (0.80 km).

Whitehead's supporters say that he made four flights that day, which resulted in conflicting accounts from different witnesses. The conflicts have been used by opponents of the claims to question whether any flights took place.

These claims are rejected by mainstream historians. Whitehead did not keep a log book or document his work. In 1980 aviation historian C.H. Gibbs-Smith called the story a "flight of fancy".[5]

A minority of commentators have supported Whitehead's claim to have flown the No. 21 and this has caused some controversy. In 2013 an editorial by Paul Jackson in the influential industry publication Jane's All the World's Aircraft credited Whitehead as the first man to build and fly a powered heavier-than-air flying machine.[6] The corporate owner of Jane's subsequently distanced itself from the editorial, stating "the article reflected Mr. Jackson's opinion on the issue and not that of IHS Jane's".[7] Tom Crouch, senior curator of aeronautics for the National Air and Space Museum (NASM) of the Smithsonian Institution, studied evidence for the alleged flight and in 2016 he issued a strong rebuttal, noting many other authorities who had already done so.[8] 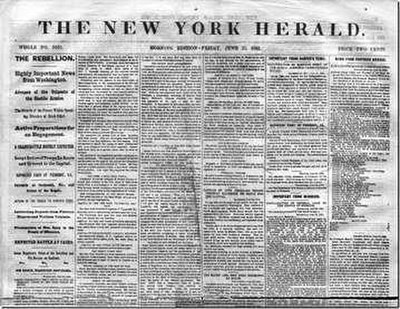 The New York Herald was a large-distribution newspaper based in New York City that existed between 1835 and 1924. At that point it was acquired by its smaller rival the New-York Tribune to form the New York Herald Tribune.

The Washington Times is an American conservative daily newspaper published in Washington, D.C., that covers general interest topics with a particular emphasis on national politics. Its broadsheet daily edition is distributed throughout the District of Columbia and in parts of Maryland and Virginia. A weekly tabloid edition aimed at a national audience is also published. The Washington Times was one of the first American broadsheets to publish its front page in full color.

Charles Harvard Gibbs-Smith was a British polymath historian of aeronautics and aviation. His obituary in The Times described him as "the recognised authority on the early development of flying in Europe and America" Richard P. Hallion called him "The greatest of all historians of early aviation".

Jane's All the World's Aircraft

Jane's All the World's Aircraft

Jane's All the World's Aircraft is an aviation annual publication founded by John Frederick Thomas Jane in 1909. Long issued by Sampson Low, Marston in Britain, it has been published by Janes Information Services since 1989/90.

Tom Day Crouch is an American aeronautics historian and curator. 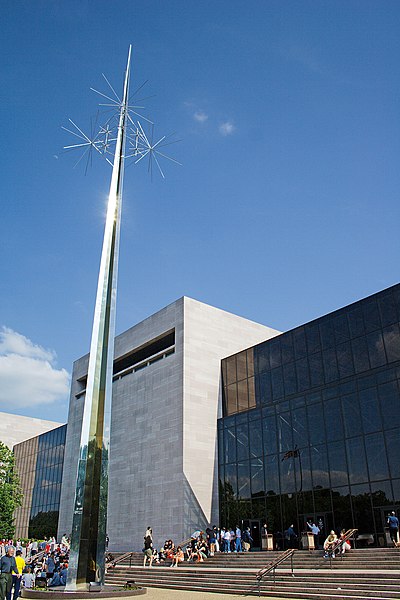 The National Air and Space Museum of the Smithsonian Institution, also called the Air and Space Museum, is a museum in Washington, D.C., US. It was established in 1946 as the National Air Museum and opened its main building on the National Mall near L'Enfant Plaza in 1976. In 2018, the museum saw approximately 6.2 million visitors, making it the fifth most visited museum in the world, and the second most visited museum in the United States. In 2020, due to long closures and a drop in foreign tourism caused by the COVID-19 pandemic, museum attendance dropped to 267,000. The museum contains the Apollo 11 Command Module Columbia, the Friendship 7 capsule which was flown by John Glenn, Charles Lindbergh's Spirit of St. Louis, the Bell X-1 which broke the sound barrier, the model of the starship Enterprise used in the science fiction television show Star Trek: The Original Series, and the Wright brothers' Wright Flyer airplane near the entrance.

The Smithsonian Institution, or simply the Smithsonian, is a group of museums and education and research centers, the largest such complex in the world, created by the U.S. government "for the increase and diffusion of knowledge". Founded on August 10, 1846, it operates as a trust instrumentality and is not formally a part of any of the three branches of the federal government. The institution is named after its founding donor, British scientist James Smithson. It was originally organized as the United States National Museum, but that name ceased to exist administratively in 1967.

Two replicas have been flown. They both introduced modern technologies and do not inform as to whether the original might have been capable of flight.[9]

In 1986 American Andrew Kosch, a local high school teacher and hang glider pilot, led a team which built a replica of Whitehead's No.21. The replica used two modern ultralight aircraft engines in place of the original steam and acetylene engines, and the landing gear track was increased for better ground handling. Initially, actor Cliff Robertson piloted the replica while under tow behind a sports car.[10][11] On December 29, 1986, Kosch made several flights in the replica, reporting that he flew 100 m (330 ft).[12][13] 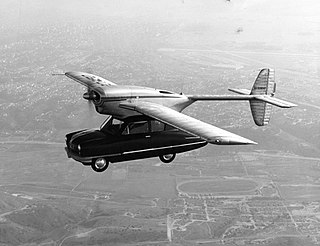 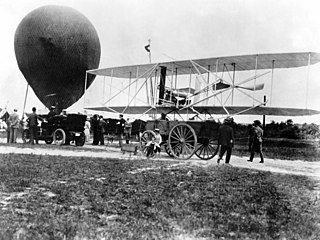 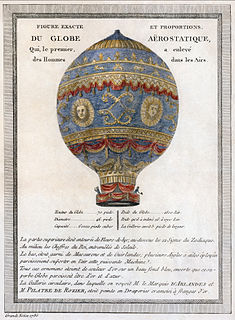 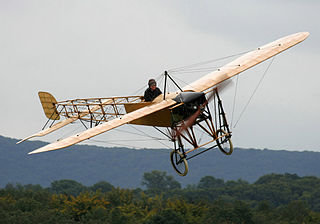 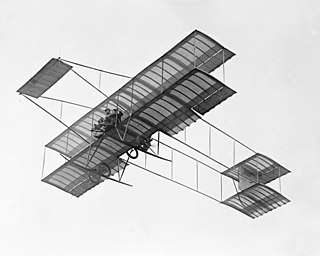 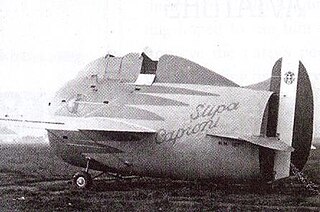 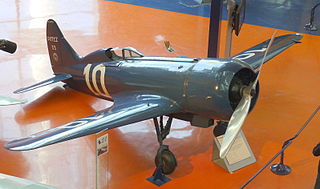 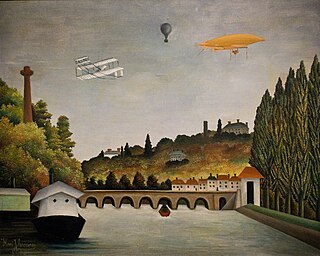 Aviation in the pioneer era