Makgoe was named Education MEC by then-premier Ace Magashule in May 2009.[3] Magashule retained him in his post in May 2014.[4] Sisi Ntombela was elected premier in March 2018 and she kept him in his post.[5] Makgoe remained in the position following the 2019 election.[6]

The Free State Provincial Legislature is the primary legislative body of the South African province of Free State. It is unicameral in its composition, and elects the premier and the executive council from among the members of the leading party or coalition in the parliament.

The African National Congress (ANC) is a social-democratic political party in South Africa. A liberation movement known for its opposition to apartheid, it has governed the country since 1994, when the first post-apartheid election installed Nelson Mandela as President of South Africa. Cyril Ramaphosa, the incumbent national President, has served as President of the ANC since 18 December 2017.

General elections were held in South Africa between 26 and 29 April 1994. The elections were the first in which citizens of all races were allowed to take part, and were therefore also the first held with universal suffrage. The election was conducted under the direction of the Independent Electoral Commission (IEC), and marked the culmination of the four-year process that ended apartheid.

Elias Sekgobelo "Ace" Magashule is a South African politician and former anti-apartheid activist who was Secretary General of the African National Congress (ANC) until his suspension on 3 May 2021. He served as the Premier of the Free State, one of South Africa's nine provinces, from 2009 until 2018, and is known to be influential in the ANC of his home province.

On 26 July 2020, Ntombela announced that Makgoe had contracted COVID-19 and had also been admitted to a hospital. She named Makalo Mohale as his acting successor until further notice.[7] 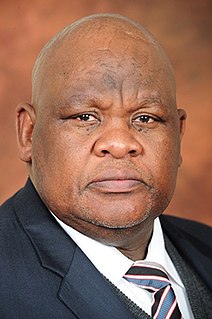