The St. James Davis chimpanzee attack was an attack by two chimpanzees on former NASCAR driver St. James Davis. He was badly mauled in the attack and his wife LaDonna Davis lost her thumb. The attack occurred on March 3, 2005, at an animal sanctuary near Bakersfield, California.

St. James and LaDonna Davis had a pet chimpanzee named Moe who they treated as their child. After their chimpanzee bit several people, the city of West Covina, California seized the primate and placed him in a wildlife sanctuary. The Davises waged a long battle with the city to get Moe back. They visited Moe frequently, and in 2005 while visiting him, they were attacked by two other chimpanzees who had escaped their enclosures.

Former NASCAR driver St. James and his wife LaDonna Davis lived in West Covina, California with their pet chimpanzee named Moe.[1] The Davises had adopted Moe from Tanzania not long after his birth in 1967.[2] Tanzanian poachers had killed Moe's mother when he was one day old.[3] The couple did not have any children,[2] so they treated Moe like their child. The chimpanzee lived with them and wore clothing like a human. Moe was also taught to use the toilet and clean himself by taking showers. The Davises had Moe act as best man at their wedding.[4] LaDonna Davis said Moe acted as a "a combination of flower-thrower and best man".[5] In 1977, when Moe was ten years old he bit a woman on her finger. The Davises found themselves in court, however the case was dismissed.[1]

In the 1990s, Moe was housed in a 10 ft (3.0 m) x 12 ft (3.7 m) enclosure at the Davis home. On August 16, 1998, he escaped and police were called. The Davises claimed that Moe had been scared by an electric shock which occurred while his cage was being repaired. It took several police officers to restrain Moe and in the process of catching him, he dented a police vehicle and mauled a police officer's hand.[5] The police officer required US$250,000 for medical treatment and subsequent rehabilitation.[1]

A year later on Sept. 2, 1999 a visitor came to see Moe. The Davises claim that they warned the woman not to attempt to approach Moe's cage but she extended her hand into his cage. Moe bit the woman's hand. The Davises claimed that the woman who was bitten had red fingernails and Moe may have mistaken them for his favorite licorice. The Davises were sued by the woman and settled the lawsuit. West Covina officials came to the Davis home and seized Moe. Moe was taken to a wildlife sanctuary.[5]

The Davises fought to regain custody of the chimpanzee but they were unsuccessful and he remained at the wildlife sanctuary.[2][5] In 2002 The Davises filed a civil rights lawsuit against West Covina, California and it was settled after the city agreed to pay the Davises US$100,000 and a sum of US$225,000 which would be used to buy the Davises a home in nearby Baldwin Park, California where they could live with Moe.[6]

West Covina is a suburban city in Los Angeles County, California, United States. Located 19 miles (31 km) east of Downtown Los Angeles in the eastern San Gabriel Valley, it is part of Greater Los Angeles. The population for the city was 106,098 at the 2010 census.

Tanzania, officially the United Republic of Tanzania, is a country in East Africa within the African Great Lakes region. It borders Uganda to the north; Kenya to the northeast; the Indian Ocean to the east; Mozambique and Malawi to the south; Zambia to the southwest; and Rwanda, Burundi, and the Democratic Republic of the Congo to the west. Mount Kilimanjaro, Africa's highest mountain, is in northeastern Tanzania. According to the United Nations, Tanzania has a population of 63.59 million, making it the most populous country located entirely south of the equator. 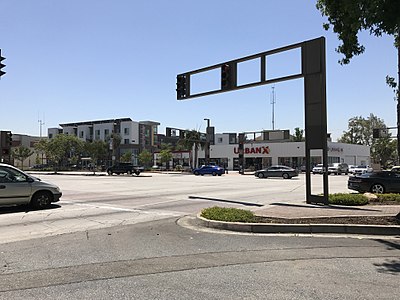 Baldwin Park is a city located in the central San Gabriel Valley region of Los Angeles County, California, United States. As of the 2020 census, the population was 72,176, down from 75,390 at the 2010 census.

On March 3, 2005, the Davises came to Animal Haven Ranch to celebrate Moe's 39th birthday. The couple brought Moe a birthday cake to celebrate and they were seated at a picnic table next to Moe's enclosure.[1] The couple brought toys, candy hearts, chocolate milk and a raspberry filled sheet cake for the birthday party. LaDonna Davis said the chimp clapped his hands with joy when he saw them. She cut a piece of cake for the chimp and then when she went to cut a second piece she noticed another chimp had gotten out of its cage. The chimp rushed her and she had her thumb bitten off. St. James pushed LaDonna under the table to protect her. A second chimp had gotten out of its cage and it too attacked. The chimpanzees both attacked St. James: one chimp attacked his face and the other attacked his foot.[5] The two young chimpanzees involved in the attack were named Buddy and Ollie.[2] The Sanctuary owner's son-in-law Mark Carruthers retrieved a 45-caliber revolver and he shot the chimp Buddy in the head. The other chimpanzee Ollie, dragged St. James's body down a walkway. Carruthers followed and he shot and killed the chimpanzee Ollie.[5][1]

St. James had lost most of his fingers, much of the flesh from his buttocks, both of his testicles, his face and his left foot.[5] In the attack the two chimpanzees had chewed off his nose and most of his face.[7] He also lost part of his torso in the attack.[3] A paramedic who arrived said, “It looked like a grizzly bear attack."[1] St. James was transported to Loma Linda University Medical Center after the attack.[7]

Two other female chimpanzees had also escaped their cages during the attack.[8] The two females named were Susie and Bones did not participate in the attack and they were found five hours later.[9] It was also reported that the Davises chimpanzee Moe played no role in the attack.[2]

After the attack St. James spent time in a coma and needed multiple surgeries.[10] The Davises were uninsured, but decided not to sue Animal Haven.[5] St. James spent six months in a hospital recovering from the attack.[2] By 2009 St. James had more than 60 surgeries.[11] He has a glass eye and two slits in the middle of his face where his nose once was; he also has no lips.[12]

In 2006 the Davises had a sign in their home's front yard which read, "Free Moe". They also went to Superior Court in Pomona, California to get the city of West Covina to honor their 2002 settlement which required the city to purchase a home for them in Baldwin Park, California so that they could reunite with their chimpanzee Moe.[6] In 2007 a Superior Court ruling said that the Davises would receive US$32,000 from West Covina because the city did not fulfill their obligations resulting from the 2002 settlement. The city was also required to pay the Davises $300 per month to cover the costs of Moe's housing. In addition the city was also required to pay for travel costs for expenses related to the Davises visits to see Moe.[13]

In the summer of 2008 when Moe was 42 years old he went missing. It was thought that he escaped from the sanctuary.[3] Moe had been housed at Jungle Exotics which trains animals for show business. He had been spotted by construction workers at a home near Jungle Exotics, and then he was seen heading toward a mountain. The Davises hired a helicopter to do flyovers hoping to flush Moe out of hiding. Authorities searched the San Bernardino National Forest but did not find the chimpanzee.[4] Moe was never found.[14] 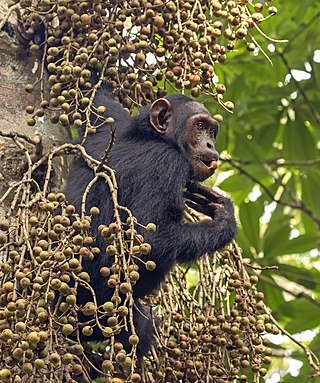 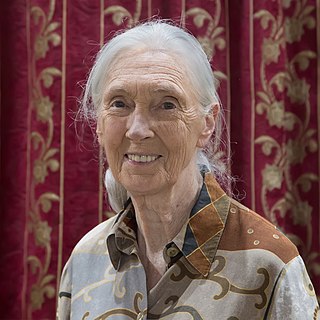 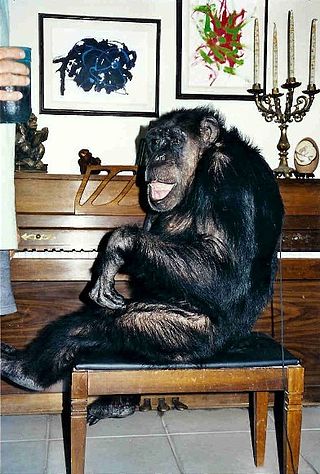 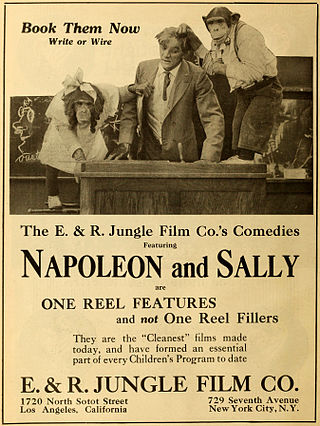 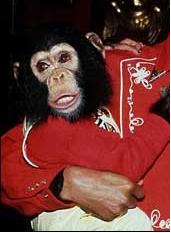 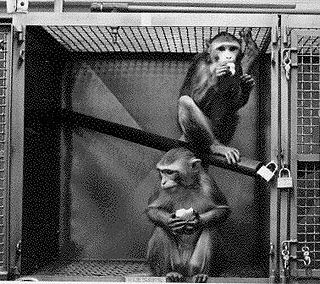 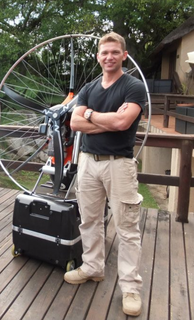 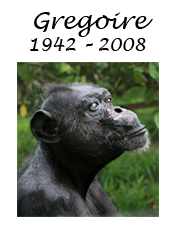 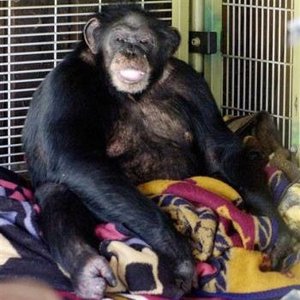 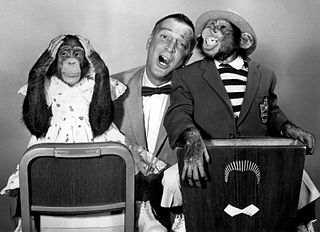