Sodium persulfate is the inorganic compound with the formula Na2S2O8. It is the sodium salt of peroxydisulfuric acid, H2S2O8, an oxidizing agent. It is a white solid that dissolves in water. It is almost non-hygroscopic and has good shelf-life.

Sodium is a chemical element with the symbol Na and atomic number 11. It is a soft, silvery-white, highly reactive metal. Sodium is an alkali metal, being in group 1 of the periodic table. Its only stable isotope is 23Na. The free metal does not occur in nature, and must be prepared from compounds. Sodium is the sixth most abundant element in the Earth's crust and exists in numerous minerals such as feldspars, sodalite, and halite (NaCl). Many salts of sodium are highly water-soluble: sodium ions have been leached by the action of water from the Earth's minerals over eons, and thus sodium and chlorine are the most common dissolved elements by weight in the oceans. 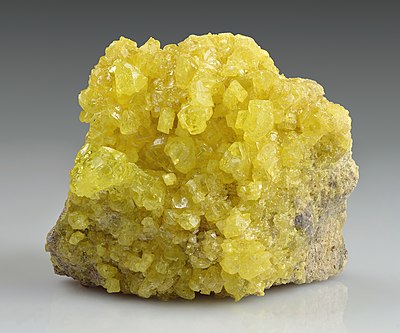 Sulfur (or sulphur in British English) is a chemical element with the symbol S and atomic number 16. It is abundant, multivalent and nonmetallic. Under normal conditions, sulfur atoms form cyclic octatomic molecules with a chemical formula S8. Elemental sulfur is a bright yellow, crystalline solid at room temperature. 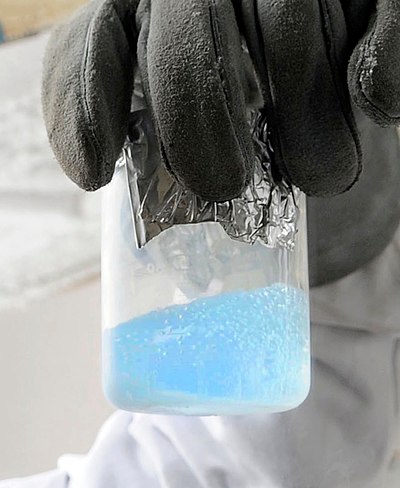 Oxygen is the chemical element with the symbol O and atomic number 8. It is a member of the chalcogen group in the periodic table, a highly reactive nonmetal, and an oxidizing agent that readily forms oxides with most elements as well as with other compounds. Oxygen is Earth's most abundant element, and after hydrogen and helium, it is the third-most abundant element in the universe. At standard temperature and pressure, two atoms of the element bind to form dioxygen, a colorless and odorless diatomic gas with the formula O2. Diatomic oxygen gas currently constitutes 20.95% of the Earth's atmosphere, though this has changed considerably over long periods of time. Oxygen makes up almost half of the Earth's crust in the form of oxides.

Peroxydisulfuric acid is an inorganic compound with a chemical formula (HO3SO)2. Also called Marshall's acid after Professor Hugh Marshall, who discovered it in 1891.

An oxidizing agent is a substance in a redox chemical reaction that gains or "accepts"/"receives" an electron from a reducing agent. In other words, an oxidizer is any substance that oxidises another substance. The oxidation state, which describes the degree of loss of electrons, of the oxidizer decreases while that of the reductant increases; this is expressed by saying that oxidizers "undergo reduction" and "are reduced" while reducers "undergo oxidation" and "are oxidized". Common oxidizing agents are oxygen, hydrogen peroxide and the halogens.

The salt is prepared by the electrolytic oxidation of sodium bisulfate:

The standard redox potential of sodium persulfate into hydrogen sulfate is 2.1 V, which is higher than that of hydrogen peroxide (1.8 V) but lower than ozone (2.2 V).[4] The sulfate radical formed in situ has a standard electrode potential of 2.7 V.

However, there are a few drawbacks in utilizing platinum anodes to produce the salts; the manufacturing process is inefficient due to oxygen evolution and the product could contain contaminants coming from platinum corrosion (mainly due to extremely oxidizing nature of the sulfate radical). Thus, boron-doped diamond electrodes have been proposed as alternatives to the conventional platinum electrodes.[5]

The sodium and potassium salts adopt very similar structures in the solid state, according to X-ray crystallography. In the sodium salt, the O-O distance is 1.476 Å. The sulfate groups are tetrahedral, with three short S-O distances near 1.44 and one long S-O bond at 1.64 Å.[1]

It is mainly used as a radical initiator for emulsion polymerization reactions for styrene based polymers such as Acrylonitrile butadiene styrene.[3] Also applicable for accelerated curing of low formaldehyde adhesives.

It is a bleach, both standalone (particularly in hair cosmetics) and as a detergent component. It is a replacement for ammonium persulfate in etching mixtures for zinc and printed circuit boards, and is used for pickling of copper and some other metals.

It is also used as a soil conditioner and for soil and groundwater remediation[5][6] and in manufacture of dyestuffs, modification of starch, bleach activator, desizing agent for oxidative desizing, etc.

Sodium persulfate is a specialized oxidizing agent in chemistry, classically in the Elbs persulfate oxidation and the Boyland–Sims oxidation reactions. It is also used in radical reactions; for example in a synthesis of diapocynin from apocynin where iron(II) sulfate is the radical initiator.[7]

Emulsion polymerization is a type of radical polymerization that usually starts with an emulsion incorporating water, monomer, and surfactant. The most common type of emulsion polymerization is an oil-in-water emulsion, in which droplets of monomer are emulsified in a continuous phase of water. Water-soluble polymers, such as certain polyvinyl alcohols or hydroxyethyl celluloses, can also be used to act as emulsifiers/stabilizers. The name "emulsion polymerization" is a misnomer that arises from a historical misconception. Rather than occurring in emulsion droplets, polymerization takes place in the latex/colloid particles that form spontaneously in the first few minutes of the process. These latex particles are typically 100 nm in size, and are made of many individual polymer chains. The particles are prevented from coagulating with each other because each particle is surrounded by the surfactant ('soap'); the charge on the surfactant repels other particles electrostatically. When water-soluble polymers are used as stabilizers instead of soap, the repulsion between particles arises because these water-soluble polymers form a 'hairy layer' around a particle that repels other particles, because pushing particles together would involve compressing these chains.

Accelerated curing is any method by which high early age strength is achieved in concrete. These techniques are especially useful in the prefabrication industry, wherein high early age strength enables the removal of the formwork within 24 hours, thereby reducing the cycle time, resulting in cost-saving benefits. The most commonly adopted curing techniques are steam curing at atmospheric pressure, warm water curing, boiling water curing and autoclaving. 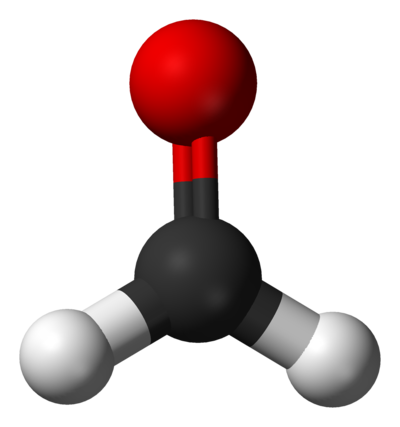 Formaldehyde is a naturally occurring organic compound with the formula CH2O and structure H−CHO. The pure compound is a pungent, colourless gas that polymerises spontaneously into paraformaldehyde, hence it is stored as an aqueous solution (formalin), which is also used to store animal specimens. It is the simplest of the aldehydes. The common name of this substance comes from its similarity and relation to formic acid. 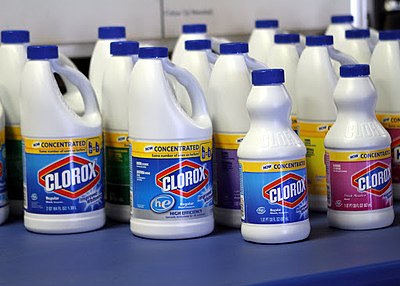 Bleach is the generic name for any chemical product that is used industrially or domestically to remove color (whitening) from a fabric or fiber or to clean or to remove stains in a process called bleaching. It often refers specifically to a dilute solution of sodium hypochlorite, also called "liquid bleach". 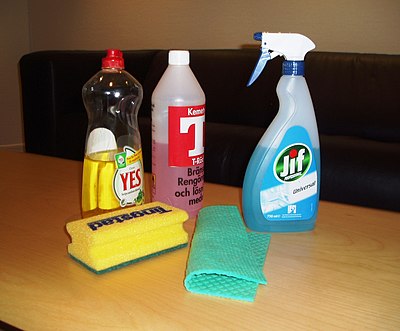 A detergent is a surfactant or a mixture of surfactants with cleansing properties when in dilute solutions. There are a large variety of detergents, a common family being the alkylbenzene sulfonates, which are soap-like compounds that are more soluble in hard water, because the polar sulfonate is less likely than the polar carboxylate to bind to calcium and other ions found in hard water. 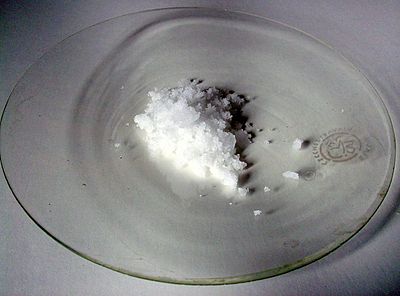 Ammonium persulfate (APS) is the inorganic compound with the formula (NH4)2S2O8. It is a colourless (white) salt that is highly soluble in water, much more so than the related potassium salt. It is a strong oxidizing agent that is used as a catalyst in polymer chemistry, as an etchant, and as a cleaning and bleaching agent.

Copper is a chemical element with the symbol Cu and atomic number 29. It is a soft, malleable, and ductile metal with very high thermal and electrical conductivity. A freshly exposed surface of pure copper has a pinkish-orange color. Copper is used as a conductor of heat and electricity, as a building material, and as a constituent of various metal alloys, such as sterling silver used in jewelry, cupronickel used to make marine hardware and coins, and constantan used in strain gauges and thermocouples for temperature measurement.

Groundwater remediation is the process that is used to treat polluted groundwater by removing the pollutants or converting them into harmless products. Groundwater is water present below the ground surface that saturates the pore space in the subsurface. Globally, between 25 per cent and 40 per cent of the world's drinking water is drawn from boreholes and dug wells. Groundwater is also used by farmers to irrigate crops and by industries to produce everyday goods. Most groundwater is clean, but groundwater can become polluted, or contaminated as a result of human activities or as a result of natural conditions. 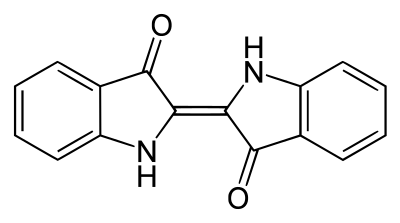 A dye is a colored substance that chemically bonds to the substrate to which it is being applied. This distinguishes dyes from pigments which do not chemically bind to the material they color. Dye is generally applied in an aqueous solution and may require a mordant to improve the fastness of the dye on the fiber. 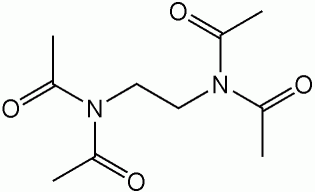 Bleach activators are compounds that allow a lower washing temperature than would be required otherwise to achieve the full activity of bleaching agents in the wash liquor. Bleaching agents, usually peroxides, are usually sufficiently active only at 60 °C and up. With bleach activators, this activity can be achieved at lower temperatures. Bleach activators are included in some laundry detergent powders, some laundry additive powders, and a few laundry additive pods. They are not included in any liquid laundry detergents. Bleach activators react with hydrogen peroxide in aqueous solution to form peroxy acids. Peroxy acids are more active bleaches than hydrogen peroxide at lower temperatures (<60 °C), but are too unstable to be stored in their active form, and hence must be generated in situ.

Desizing is the process of removing the size material from warp yarns after a textile fabric is woven.

The salt is an oxidizer and forms combustible mixtures with organic materials such as paper. 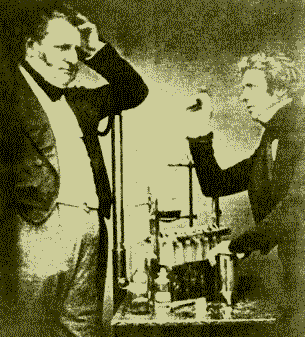 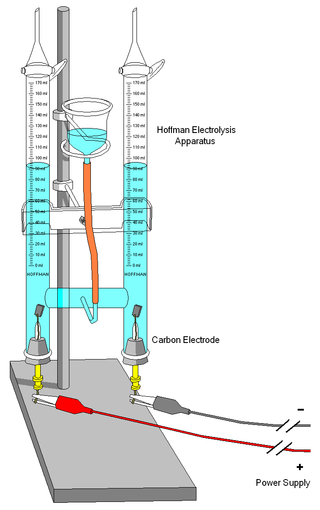 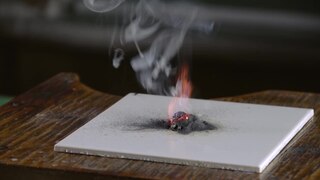 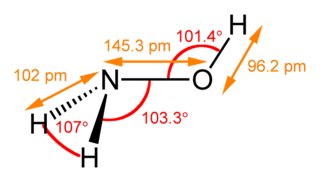 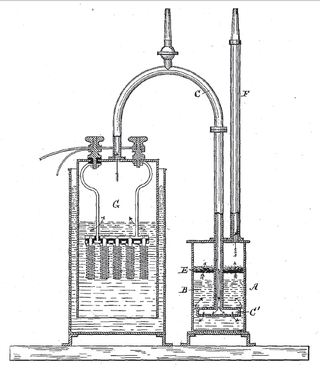 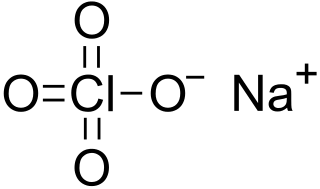 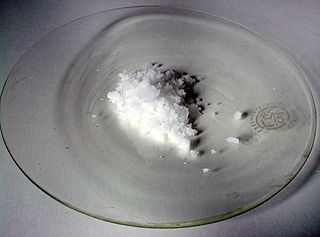 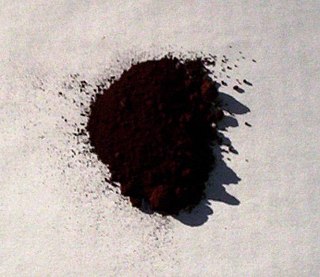 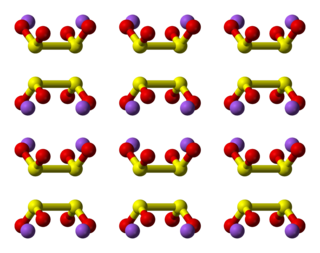 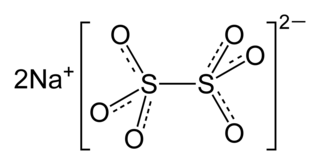 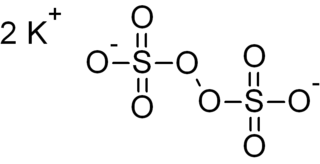 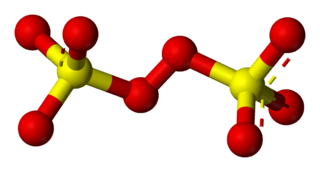 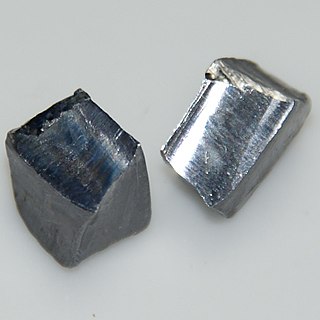