Raymond was launched in 1782 as an East Indiaman for the British East India Company (EIC). She made six voyages for the EIC and participated as a transport in Admiral Hugh Cloberry Christian's expedition in 1795–96 to the West Indies. The French captured her in 1798. American owners purchased her, renamed her Orion, and sailed her from Mauritius to Boston in 1799.

She was named after Sir Charles Raymond, 1st Baronet (1713–1788), a prominent EIC Captain, and after his retirement from the sea, manager of their voyages.[a]

East Indiaman was a general name for any sailing ship operating under charter or licence to any of the East India trading companies of the major European trading powers of the 17th through the 19th centuries. The term is used to refer to vessels belonging to the Austrian, Danish, Dutch, English, French, Portuguese, or Swedish companies.

The East India Company (EIC) was an English, and later British, joint-stock company founded in 1600 and dissolved in 1874. It was formed to trade in the Indian Ocean region, initially with the East Indies, and later with East Asia. The company seized control of large parts of the Indian subcontinent, colonised parts of Southeast Asia and Hong Kong. At its peak, the company was the largest corporation in the world. The EIC had its own armed forces in the form of the company's three Presidency armies, totalling about 260,000 soldiers, twice the size of the British army at the time. The operations of the company had a profound effect on the global balance of trade, almost single-handedly reversing the trend of eastward drain of Western bullion, seen since Roman times.

Sir Hugh Cloberry Christian KB was an officer of the Royal Navy who saw service during the American War of Independence, and the French Revolutionary Wars.

The Raymond Baronetcy of Valentine House, in the County of Essex, was created in the Baronetage of Great Britain on 31 May 1774 for Charles Raymond, of Valentines, Ilford in Essex, who was High Sheriff of Essex from 1771 to 1772. It was created with remainder to his son-in-law William Burrell, who succeeded him as second Baronet. The latter was the nephew of the first Burrell baronet of the 1766 creation and the uncle of the first Baron Gwydyr. The third Burrell baronet succeeded to the title of Baronet Raymond of Valentine House on 20 January 1796.

Captain Smedley sailed from Portsmouth on 5 April 1788, bound for Bombay and China. Raymond reached Madagascar on 6 July and arrived at Bombay on 4 August. She was at Batvia on 25 November, and arrived at Whampoa Anchorage on 8 February 1789. Homeward bound, she crossed the Second Bar on 13 March, reached St Helena on 25 June, and arrived at The Downs on 25 August.[2]

Captain Smedley sailed from The Downs on 7 March 1791, bound for Bombay. She reached São Tiago on 8 April, and was at Madagascar on 10 June; she arrived at Bombay on 15 July. On 2 November she was at Cannanore, on 14 November Tellicherry, and 14 December Onore. On 30 December she returned to Bombay. Homeward bound, she was at Tellicherry on 30 January 1792, Anjengo on 8 February and the Cape on 3 May. She reached St Helena on 8 June, and arrived at The Downs on 16 August.[2]

War with France had broken out in 1793 so Captain Smedley acquired a letter of marque on 15 March 1794.

The British government held Raymond at Portsmouth, together with a number of other Indiamen in anticipation of using them as transports for an attack on Île de France (Mauritius). It gave up the plan and released the vessels in May 1794. It paid £458 6s 8d for having delayed her departure by 22 days.

Captain Smedley then sailed from Portsmouth on 2 May, bound for Bombay. Raymond arrived at Bombay on 4 September. She then visited Cannonore (27 October), Calicut (2 November), Anjengo (12 November), Cochin (24 November), and Mahé (9 December), before returning to Bombay on 25 December. Homeward bound she was at Tellicherry on 21 January 1795, reached St Helena on 18 March, and arrived at The Downs on 23 July.[2]

The British Government took up a number of East Indiamen, Raymond among them, and other transports to carry troops on Admiral Christian's expedition to the West Indies. the Fleet did not leave Spithead until 16 November. Bad weather forced the Fleet to return to port after having sustained heavy losses. The Fleet attempted to sail again on 9 December, but bad weather forced most of the warships to return to port on 26 January 1796.[4] The Fleet finally succeeded in leaving on 20 March. Raymond carried hospital tents, bedding, and stores.[5]

The fleet arrived at Barbados around 26 April. It then sailed to invade St Lucia, with troops under Lieutenant-General Sir Ralph Abercromby. St Lucia surrendered to the British on 25 May.[6] The British went on to capture Saint Vincent and Grenada. Raymond arrived at Deal on 7 August.

See also: Transport vessels for the British expedition to the West Indies (1795)

Captain Smedley sailed from Portsmouth on 5 June 1797, bound for Bombay.[2]

On 20 April 1798 the French frigate Preneuse captured Raymond just after Raymond came to anchor in Tellicherry Roads. Raymond was homeward bound from Bombay. When she arrived at Tellicherry Woodcot was already there, having loaded a cargo of pepper. Raymond resisted for an hour, and Woodcot for some 20 minutes, before they both struck. The French had fired primarily at the Indiamen's masts and riggings; even so, Raymond had three killed and four or five wounded, among them a woman passenger grazed by a splinter. Casualties on Préneuse were of the same order.[7]

The next day the French, under a flag of truce, sent the captains, crews, and passengers of both ships ashore at Tellicherry with their baggage. Both Raymond and Woodcot then sailed westward under prize crews.[7]

Saint Helena is a British overseas territory located in the South Atlantic Ocean. It is a remote volcanic tropical island 1,950 kilometres west of the coast of south-western Africa, and 4,000 kilometres (2,500 mi) east of Rio de Janeiro in South America. It is one of three constituent parts of the British Overseas Territory of Saint Helena, Ascension and Tristan da Cunha. 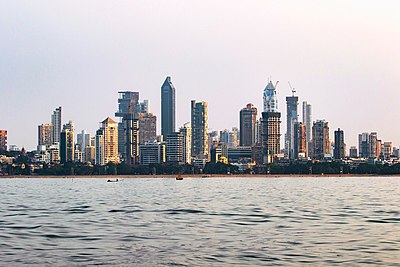 Mumbai is the capital city of the Indian state of Maharashtra and the de facto financial centre of India. According to the United Nations, as of 2018, Mumbai is the second-most populous city in India after Delhi and the eighth-most populous city in the world with a population of roughly 20 million. As per the Indian government population census of 2011, Mumbai was the most populous city in India with an estimated city proper population of 12.5 million (1.25 crore) living under the Brihanmumbai Municipal Corporation. Mumbai is the centre of the Mumbai Metropolitan Region, the sixth most populous metropolitan area in the world with a population of over 23 million. Mumbai lies on the Konkan coast on the west coast of India and has a deep natural harbour. In 2008, Mumbai was named an alpha world city. It has the highest number of millionaires and billionaires among all cities in India.

The Cape of Good Hope is a rocky headland on the Atlantic coast of the Cape Peninsula in South Africa.

Ascension Island is an isolated volcanic island, 7°56′ south of the Equator in the South Atlantic Ocean. It is about 1,000 miles (1,600 km) from the coast of Africa and 1,400 miles (2,300 km) from the coast of South America. It is governed as part of the British Overseas Territory of Saint Helena, Ascension and Tristan da Cunha, of which the main island, Saint Helena, is around 800 miles (1,300 km) to the southeast. The territory also includes the sparsely populated Tristan da Cunha archipelago, 2,300 miles (3,700 km) to the south, about halfway to the Antarctic Circle.

Bengkulu, formerly Bencoolen is the capital of the Indonesian province of Bengkulu. The city is the second largest city on the west coast of Sumatra Island after Padang. Previously this area was under the influence of the kingdom of Inderapura and the Sultanate of Banten. The city also became the exile of Sukarno during the period of 1939 - 1942. It covers an area of 151.70 km2 and had a population of 308,544 at the 2010 Census and 373,591 at the 2020 Census. The city is also the largest city of Bengkulu Province.

Batavia was the capital of the Dutch East Indies. The area corresponds to present-day Jakarta, Indonesia. Batavia can refer to the city proper or its suburbs and hinterland, the Ommelanden, which included the much-larger area of the Residency of Batavia in the present-day Indonesian provinces of Jakarta, Banten and West Java.

Santiago is the largest island of Cape Verde, its most important agricultural centre and home to half the nation's population. Part of the Sotavento Islands, it lies between the islands of Maio and Fogo. It was the first of the islands to be settled: the town of Ribeira Grande was founded in 1462. Santiago is home to the nation's capital city of Praia.

Kannur, formerly known in English as Cannanore, is a city and a municipal corporation in the state of Kerala, India. It is the administrative headquarters of the Kannur district and situated 274 kilometres (170 mi) north of the major port city and commercial hub Kochi and 137 kilometres (85 mi) south of the major port city and a commercial hub, Mangalore. During the period of British colonial rule in India, when Kannur was a part of the Malabar District, the city was known as Cannanore. Kannur is the sixth largest urban agglomeration in Kerala. As of 2011 census, Kannur Municipal Corporation, the local body which administers mainland area of city, had a population of 232,486.

Honnavar is a town in Uttara Kannada district of Karnataka, India. it is located 80 km (50 mi) from Sirsi.

Anchuthengu, formerly known as Anjengo, Angengo or Anjenga, is a coastal panchayath and town in the Thiruvananthapuram District of Kerala. It is situated 9km south-west of Varkala Town along Trivandrum - Varkala - Kollam coastal highway.

The French Revolutionary Wars were a series of sweeping military conflicts lasting from 1792 until 1802 and resulting from the French Revolution. They pitted France against Britain, Austria, Prussia, Russia, and several other monarchies. They are divided in two periods: the War of the First Coalition (1792–97) and the War of the Second Coalition (1798–1802). Initially confined to Europe, the fighting gradually assumed a global dimension. After a decade of constant warfare and aggressive diplomacy, France had conquered territories in the Italian Peninsula, the Low Countries and the Rhineland in Europe and abandoned Louisiana in North America. French success in these conflicts ensured the spread of revolutionary principles over much of Europe.

A letter of marque and reprisal was a government license in the Age of Sail that authorized a private person, known as a privateer or corsair, to attack and capture vessels of a nation at war with the issuer. After capturing, the privateers could bring the case of that prize before their own admiralty court for condemnation and transfer of ownership to the privateer. A letter of marque and reprisal would include permission to cross an international border to conduct a reprisal and was authorized by an issuing jurisdiction to conduct reprisal operations outside its borders.

Woodcot and Raymond were reported to have been at Île de France in September.[9] The French apparently sold Raymond to American owners who named her Orion. She sailed from Île de France on 25 February 1799, bound for Boston, carrying the French Intendant General and his family, and a number of settlers, all concerned about the unsettled state of the colony.[10] 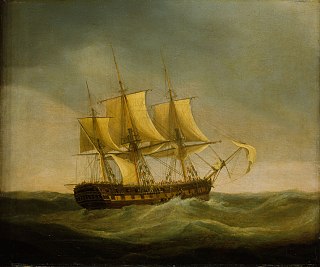