The Puducherry–Kanniyakumari Weekly Express is an Express train belonging to Southern Railway zone that runs between Puducherry and Kanniyakumari in India. It is currently being operated with 16861/16862 train numbers on a weekly basis.[1][2][3] It is the first express train that ran on the gauge converted route of Manamadurai–Virudhunagar line. Later Silambu Express extended from Karaikudi Junction via this route till Sengottai.

Express trains are express rail services of India. Express trains make a small number of stops, unlike ordinary passenger or local trains. Because of their limited stops, these trains are able to obtain the highest speeds of any trains in India. An express train is one where the average speed, excluding halts, is greater than 42 km/h. Including halts the average speed often is below 42 km/h. Although this is pretty slow as compared to international standards, the "Express" trains here mean faster than the ordinary passenger and local trains. In some cases, trains run express where there is an overlapping passenger train service available, and run as passenger train, where there is no supplemental passenger service. 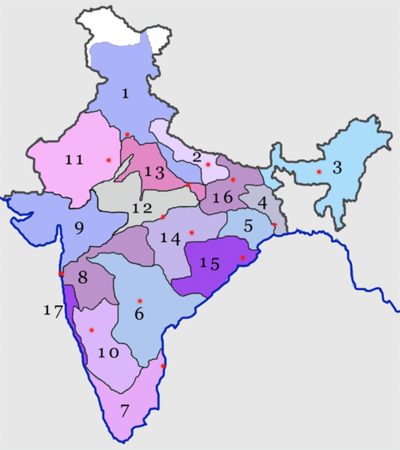 The Southern Railway, headquartered at Chennai, is one of the 19 zones of Indian Railways. It is the earliest of the 19 zones of the Indian Railways created in independent India. It was created on 14 April 1951 by merging three state railways, namely, the Madras and Southern Mahratta Railway, the South Indian Railway Company, and the Mysore State Railway. The South Indian Railway was originally created in the British colonial times as Great Southern of India Railway Co founded in Britain in 1853 and registered in 1859. Its original headquarters was in Tiruchirappalli (Trichy) and was registered as a company in London only in 1890. At present, after re-organization of existing railway zones and creation of new zones undertaken by the Indian Railways between 2002 and 2003, Southern Railway has emerged as the 4th largest zone after undertaking some gauge conversion projects and creation of new lines. The trains operated by the southern railway are rated the cleanest as well as cleanly maintained trains of the Indian Railways.

Puducherry railway station is a railway terminus of the Villupuram–Pondicherry rail line serving the city of Pondicherry, headquarter of Puducherry Union territory

The Silambu Express (20681/20682) is a train that runs between Chennai Egmore and Sengottai via Karaikkudi Junction. Initially it ran upto Manamadurai, later it was extended upto Sengottai. It was the only train in Indian Railways where LHB rakes were replaced by ICF coaches again. According to IR if a train gets new LHB coaches it won't be converted to ICF. But this train was again replaced with ICF coaches after getting new LHB rakes.

Karaikkudi Junction is one of the major passenger rail head and major junction located in Sivaganga district and serving the towns of karaikudi, Devakottai and Thirupathur in Tamil Nadu.

Puducherry railway station is a railway terminus of the Villupuram–Pondicherry rail line serving the city of Pondicherry, headquarter of Puducherry Union territory

Karaikkudi Junction is one of the major passenger rail head and major junction located in Sivaganga district and serving the towns of karaikudi, Devakottai and Thirupathur in Tamil Nadu.

Sivaganga railway station serves the city of Sivaganga, India. The station belongs to the Madurai railway division and is a major transit point in Sivagangai district. It is also known by its official code: SVGA. It is under the station category B. It is one of the district headquarters railway station in India.

Kovilpatti railway station is a train station connecting the city of Thoothukudi, Tirunelveli, Madurai in the Indian state of Tamil Nadu. The station belongs to the Madurai railway division, a part of Southern Railway Zone. 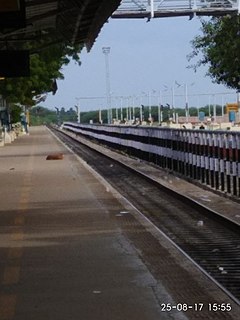 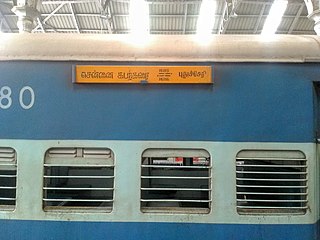 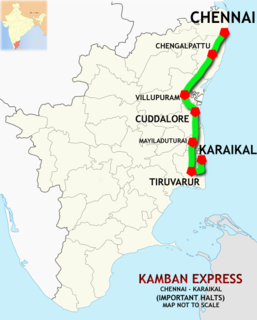