Pier Park is a lifestyle center in Panama City Beach, Florida. It opened in 2008 and features Dillard's, J. C. Penney, and Target as anchor stores.

Panama City Beach is a resort town in Bay County, Florida, United States, on the Gulf of Mexico coast. As of the 2010 census it had a population of 12,018. The city is often referred to under the umbrella term of "Panama City". Panama City Beach's slogan is "The World's Most Beautiful Beaches" due to the unique, sugar-white sandy beaches of northwest Florida.

Dillard's, Inc., is an upscale American department store chain with approximately 282 stores in 29 states and headquartered in Little Rock, Arkansas. Currently, the largest number of stores are located in Texas with 57 and Florida with 42. The company also has stores in 27 more states; however, it is absent from the Northeast, most of the Upper Midwest, the Northwest, and most of California, aside from three stores in smaller cities.

Target Corporation is an American big box department store chain headquartered in Minneapolis, Minnesota. It is the seventh largest retailer in the United States, and a component of the S&P 500 Index. Target was established as the discount division of Dayton's department store of Minneapolis in 1962. It began expanding the store nationwide in the 1980s, and introduced new store formats under the Target brand in the 1990s. The company has found success as a cheap-chic player in the industry. The parent company was renamed Target Corporation in 2000, and divested itself of its last department store chains in 2004. It suffered from a massive, highly publicized security breach of customer credit card data and the failure of its short-lived Target Canada subsidiary in the early 2010s, but experienced revitalized success with its expansion in urban markets within the United States.

In the late 1990s to early 2000s there was talks about an outdoor shopping complex in Panama City Beach that would be adjacent to the Gulf Front with retail stores, dining options, and a movie theatre. The Pier Park project officially broke ground in 2002 with a 5 to 6 year timeline for completion. It neared completion in late 2007 for a Spring 2008 opening date. Pier Park officially opened on February 14, 2008. Among the first stores to open were anchor stores including a Dillard's, J. C. Penney, and Target, all of which are still in operation.[3] Other tenants include Jimmy Buffett's Margaritaville restaurant, Buffalo Wild Wings, Marble Slab Creamery, Old Navy, Nike Factory Outlet, Five Guys Burgers and Fries, Victoria's Secret and Dick's Last Resort,[4] and a movie theater owned by Southern Theatres, The Grand 16, which features IMAX 3D as well as RealD 3D. Forever 21 opened in the former Borders Bookstore, which closed with the rest of the chain in 2011.[5]

The opening of Pier Park led to many other developments in the area, including a Walmart store,[6] an adjacent strip mall called Pier Park West, and a second shopping center complex called Pier Park North. Pier Park West contains GameStop, Dickey's Barbecue Pit, Jimmy John's, and Chipotle. Pier Park North, completed in 2015, is home to Bealls Outlet, Five Below, Dick's Sporting Goods, Ross Dress For Less, The Fresh Market, Petsmart, Cost Plus World Market, Bed Bath & Beyond, Rooms To Go, Chili's, Texas Roadhouse, Wayback Burgers, and Jersey Mike's Subs. A fourth development Pier Park East is in the works to include an extension of the current Pier Park with more retail, an indoor family entertainment center, a hotel and residential units, although construction has yet to begin. As of 2022, there has been no further announcement regarding this project with some speculation as the ongoing COVID-19 pandemic putting this project to a halt.ref name="wjhg2">"Pier Park hits three-year anniversary". wjhg.com. Retrieved 14 July 2016.

Dillard's, Inc., is an upscale American department store chain with approximately 282 stores in 29 states and headquartered in Little Rock, Arkansas. Currently, the largest number of stores are located in Texas with 57 and Florida with 42. The company also has stores in 27 more states; however, it is absent from the Northeast, most of the Upper Midwest, the Northwest, and most of California, aside from three stores in smaller cities.

Jimmy Buffett's Margaritaville is the name of a United States–based hospitality company that manages and franchises a casual dining American restaurant chain, a chain of stores selling Jimmy Buffett–themed merchandise, and casinos with lodging facilities.

Marble Slab Creamery is an American chain of ice cream shops owned by FAT Brands. Its corporate offices are in Atlanta, Georgia.

Old Navy is an American clothing and accessories retailing company owned by multinational corporation Gap Inc. It has corporate operations in the Mission Bay neighborhood of San Francisco, California. The largest of the Old Navy stores are its flagship stores, located in New York City, Seattle, Chicago, San Francisco, Manila, and Mexico City.

Dick's Last Resort is a bar and restaurant chain in the United States, known for its intentional employment of an obnoxious staff. The chain consists of seventeen restaurants. The restaurant has its origins in Dallas with the original owner, Dick Chase's opening of a "fine-dining" establishment in 1985. The establishment was a complete failure, which resulted in bankruptcy. Rather than continue with the upscale restaurant motif, Dick retooled his efforts and decided to "go sloppy." Chase's likeness is still featured on their T-shirts and promotional materials. The end result was a success, leading to the creation of more locations.

Forever 21 is a multinational fast fashion retailer headquartered in Los Angeles, California, United States. Originally founded as the store Fashion 21 in Highland Park, Los Angeles in 1984, it is currently operated by Authentic Brands Group and Simon Property Group, with about 540 outlets. 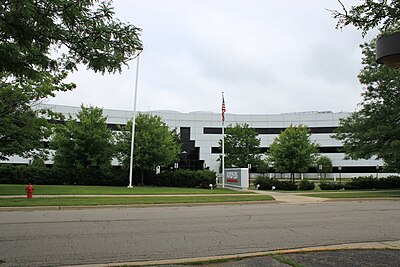 Borders Group, Inc. was an American multinational book and music retailer based in Ann Arbor, Michigan, United States. In its final year, the company employed about 19,500 people throughout the U.S., primarily in its Borders and Waldenbooks stores.

GameStop Corp. is an American video game, consumer electronics, and gaming merchandise retailer. The company is headquartered in Grapevine, Texas, and is the largest video game retailer worldwide. As of 29 January 2022, the company operates 4,573 stores including 3,018 in the United States, 231 in Canada, 417 in Australia and 907 in Europe under the GameStop, EB Games, EB Games Australia, Micromania-Zing, ThinkGeek and Zing Pop Culture brands. The company was founded in Dallas in 1984 as Babbage's, and took on its current name in 1999.

Dickey's Barbecue Pit is an American family-owned barbecue restaurant chain based in Dallas, Texas, and is a subsidiary of Dickey's Capital Group.

Jimmy John's is an American sandwich chain headquartered in Champaign, Illinois. The business was founded by Jimmy John Liautaud in 1983. After Liautaud graduated from high school, his father gave him a choice to either join the military or start a business. Liautaud, choosing the latter, initially decided to start a hot dog business, but changed to opening a sandwich business due to costs.

A chipotle, or chilpotle, is a smoke-dried ripe jalapeño chili pepper used for seasoning. It is a chili used primarily in Mexican and Mexican-inspired cuisines, such as Tex-Mex and Southwestern United States dishes. It comes in different forms, such as chipotles en adobo. 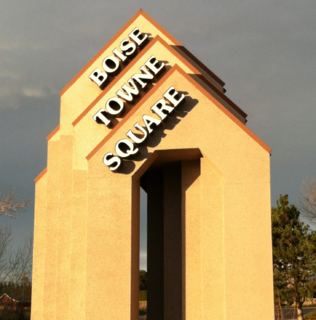 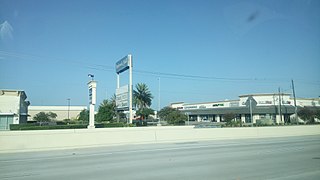 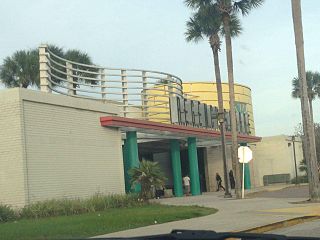 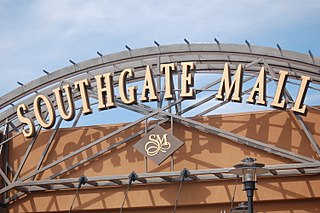 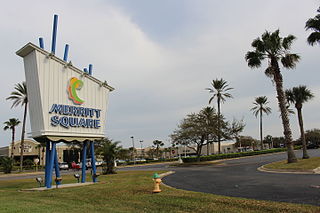