Novomatic is an international gambling company based in Austria, founded by Johann Graf in 1980.[4]

Novomatic operates about 2,000 casinos and other gaming facilities in about 50 countries, many of them under the Admiral Casino brand.[5] It also offers online gambling, and produces slot machines and other technology for the gaming industry. As of 2021, it has about 21,000 employees and annual revenue of €1.8 billion.

Johann Graf initially partnered with Gerhard Brodnik in the 1970s to start Brodnik & Graf, a company that was importing pinball machines from Belgium. In 1980, Brodnik decided to quit, and Graf oriented towards producing gambling machines under the Admiral brand. A number of Admiral branded casinos were opened.[a] Novomatic expanded globally during the decade and vastly improved the technology. It was among the first gambling equipment manufacturers to use touch screen technology.

In 2010, Novomatic expanded into online gambling business by acquiring controlling stake in London based Greentube studio. Greentube, in addition to their original content, is the main online publisher of already established Novomatic slot games. Greentube then purchased Canadian based Bluebat Games studio in 2015 to further expand its online presence.[10]

Instant win and digital scratchcard provider, Gamevy, formed a partnership with Novomatic subsidiary, Novomatic Lottery Solutions (NLS), in November 2016. The tie-up presents NLS with an opportunity to focus on "the broader lottery demographic".[11][12]

In 2018 Novomatic completed the purchase of 52% of Australian gambling equipment maker Ainsworth Game Technology Limited for around 300 million Euros. That was Novomatic's largest acquisition since the acquisition of Greentube in 2010.[13]

In November 2022, it was announced Novomatic had acquired the Italian gambling business, HBG Group.[14]

This segment accounts for 56% of the company's revenues as of 2021, with the bulk of the business coming from Austria, Germany, Italy, the United Kingdom, and Eastern Europe.[16]

Novomatic operates Admiral Casino in the United Kingdom, a brand that includes a licensed online casino, as well as a chain of more than 200 gambling venues in the UK operated by Luxury Leisure. Its online casino includes slots, jackpot games, roulette, blackjack, table games, and live casino. Luxury Leisure is owned by Greentube Alderney Limited, part of the Greentube group, which in turn is owned by Novomatic.

In 2014, Novomatic acquired Luxury Leisure, which operated seaside amusement arcades and other venues. In June 2016, Novomatic bought the UK gambling company Talarius, which operated the Quicksilver high street gambling outlets, from the Tatts Group.[21][22][23] These retail gambling arcades were combined and rebranded as "Admiral".[23][22]

In the United Kingdom, Ireland, Australia and New Zealand, a betting shop is a shop away from a racecourse ("off-course") where one can legally place bets in person with a licensed bookmaker. Most shops are part of chains including William Hill, Ladbrokes, or Coral. In Australia and New Zealand, they are operated by totalisator agencies In the United States post PASPA, brands like DraftKings, FanDuel and William Hill have a presence. Betting shops include America's Betshop and Betfred.

Online gambling is any kind of gambling conducted on the internet. This includes virtual poker, casinos and sports betting. The first online gambling venue opened to the general public was ticketing for the Liechtenstein International Lottery in October 1994. Today the market is worth around $40 billion globally each year, according to various estimates. 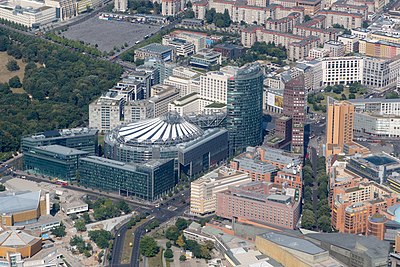 Potsdamer Platz is a public square and traffic intersection in the center of Berlin, Germany, lying about 1 km (1,100 yd) south of the Brandenburg Gate and the Reichstag, and close to the southeast corner of the Tiergarten park. It is named after the city of Potsdam, some 25 km (16 mi) to the south west, and marks the point where the old road from Potsdam passed through the city wall of Berlin at the Potsdam Gate. After developing within the space of little over a century from an intersection of rural thoroughfares into the most bustling traffic intersection in Europe, it was totally destroyed during World War II and then left desolate during the Cold War era when the Berlin Wall bisected its former location. Since German reunification, Potsdamer Platz has been the site of major redevelopment projects. 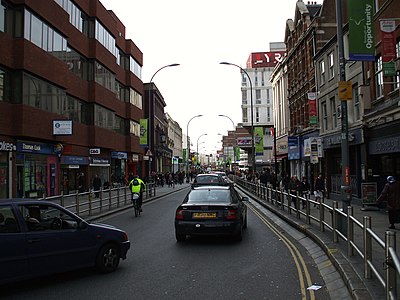 King Street, Hammersmith is the main shopping street in Hammersmith, London. It runs west–east, and forms part of the A315, and is the eastern continuation of Chiswick High Road, where it meets Goldhawk Road, close to Stamford Brook tube station. At the eastern end it meets Hammersmith Broadway and continues east as Hammersmith Road where it forms a crossroads with the A219, the Shepherd's Bush Road running northwards, and the Fulham Palace Road running south. 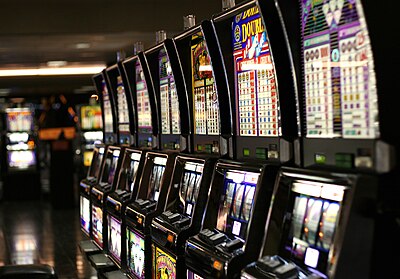 A slot machine, fruit machine or poker machine is a gambling machine that creates a game of chance for its customers. Slot machines are also known pejoratively as one-armed bandits because of the large mechanical levers affixed to the sides of early mechanical machines and the games' ability to empty players' pockets and wallets as thieves would.

Roulette is a casino game named after the French word meaning little wheel which was likely developed from the Italian game Biribi. In the game, a player may choose to place a bet on a single number, various groupings of numbers, the color red or black, whether the number is odd or even, or if the numbers are high (19–36) or low (1–18).

In 2017, Tatts Group combined with Tabcorp Holdings Limited under the Tabcorp brand.

Alderney Gambling Control Commission (AGCC) was established in May 2000. The Commission is independent and non political, and regulates eGambling on behalf of the States of Alderney. The Commission ensures that its regulatory and supervisory approach meets the very highest of international standards. The mission of AGCC is to maintain the integrity and ensure fairness of online gambling business in Alderney. The commission seeks all aspects of online gambling services to be delivered in accordance with high industry standards, based on the principles of honesty. These aspects include such issues as funding, gains pay offs, software performed processes, etc. The commission claims to protect players' interests from any kind of criminal influence. The Commission is chaired by Lord Faulkner of Worcester.

A gaming control board (GCB), also called by various names including gambling control board, casino control board, gambling board, and gaming commission, is a government agency charged with regulating casino and other types of gaming in a defined geographical area, usually a state, and of enforcing gaming law in general.

Donald Franciszek Tusk is a Polish politician who was President of the European Council from 2014 to 2019. He served as the 14th Prime Minister of Poland from 2007 to 2014 and was a co-founder and leader of the Civic Platform political party from 2003 to 2014. On 20 November 2019, Tusk was elected as the president of the European People's Party (EPP), Europe's largest transnational political party and on 3 July 2021 he returned to Polish politics by reassuming the leadership of the Civic Platform.

Rzeczpospolita is the official name of Poland and a traditional name for some of its predecessor states. It is a compound of rzecz "thing, matter" and pospolita "common", a calque of Latin rés pública, i.e. republic, in English also rendered as commonwealth (historic) and republic (current).

Andrzej Bobola Czuma (listen) is a Polish politician, lawyer and historian. He was an activist of the Polish anti-Communist opposition in the Polish People's Republic and was oppressed and imprisoned by the Communist authorities. In the 1980s he left for the USA where he became an activist in the community of Polish expats. Since 2006, Czuma has been a member of the Polish Parliament as a representative of the Civic Platform political party.

Österreichischer Rundfunk is an Austrian national public broadcaster. Funded from a combination of television licence fee revenue and limited on-air advertising, ORF is the dominant player in the Austrian broadcast media. Austria was the last country in continental Europe after Albania to allow nationwide private television broadcasting, although commercial TV channels from neighbouring Germany have been present in Austria on pay-TV and via terrestrial overspill since the 1980s. 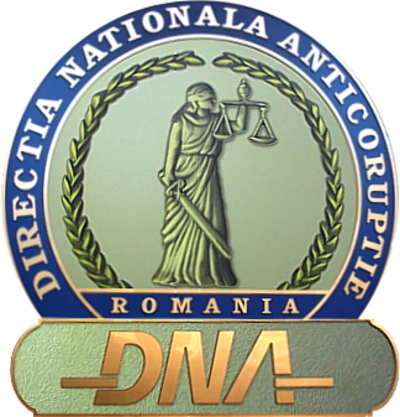 The National Anticorruption Directorate, formerly National Anticorruption Prosecution Office, is the Romanian agency tasked with preventing, investigating and prosecuting corruption-related offenses that caused a material damage to the Romanian state. The institution deals with the fight against high corruption offences, which have caused damage greater than €200,000 or if the object of the crime is property or sums of money amounting to over €10,000. 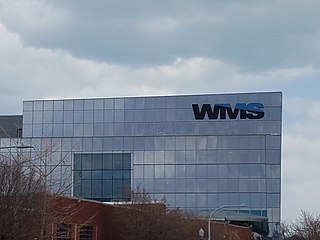 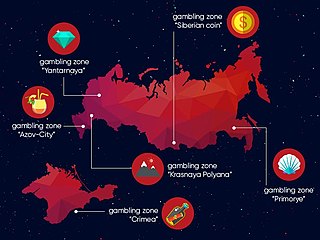 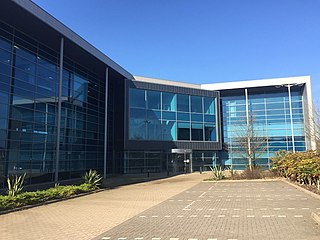 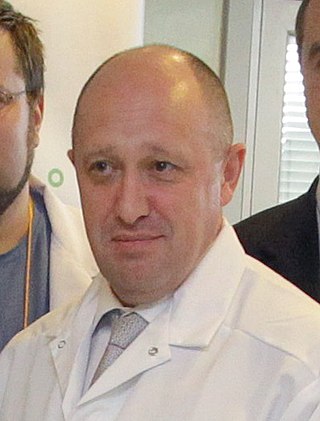