Moira Mary Jardine FRSE[2][3] is a British astrophysicist with an interest in young stars, particularly the structure of their magnetic fields and coronae, and the mechanisms by which they interact with their disks and planets.[4] She was promoted to a Personal Chair in 2012, making her the first female professor of Physics at the University of St Andrews.[5]

Astrophysics is a science that employs the methods and principles of physics and chemistry in the study of astronomical objects and phenomena. As one of the founders of the discipline said, Astrophysics "seeks to ascertain the nature of the heavenly bodies, rather than their positions or motions in space–what they are, rather than where they are." Among the subjects studied are the Sun, other stars, galaxies, extrasolar planets, the interstellar medium and the cosmic microwave background. Emissions from these objects are examined across all parts of the electromagnetic spectrum, and the properties examined include luminosity, density, temperature, and chemical composition. Because astrophysics is a very broad subject, astrophysicists apply concepts and methods from many disciplines of physics, including classical mechanics, electromagnetism, statistical mechanics, thermodynamics, quantum mechanics, relativity, nuclear and particle physics, and atomic and molecular physics. 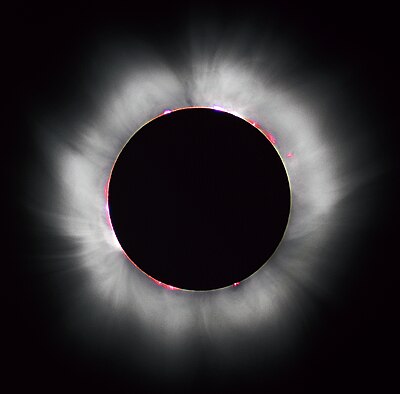 A corona is the outermost layer of a star's atmosphere. It consists of plasma. 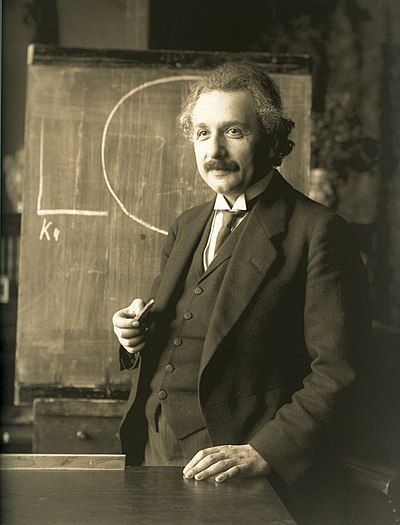 Professor is an academic rank at universities and other post-secondary education and research institutions in most countries. Literally, professor derives from Latin as a "person who professes". Professors are usually experts in their field and teachers of the highest rank.

Jardine was educated at the University of St Andrews where she was awarded a PhD in 1989 for research investigating steady state models of magnetic reconnection supervised by Eric Priest.[1]

Eric Ronald Priest is Emeritus Professor at St Andrews University, where he previously held the Gregory Chair of Mathematics and a Bishop Wardlaw Professorship.

Jardine's research has been a journey through the Solar System, outwards from the Sun to other stars. She began by studying the Sun,[6] and moved on to other stars when she joined her husband, Andrew Collier Cameron, at the University of Sussex.[7] In 1996, the pair transferred to the University of St Andrews, where they remain, with Jardine's research now focussing on magnetic activity of young suns.[8]

Jardine chaired the 2008 Cool Stars Conference Cool Stars, Stellar Systems, and the Sun, hosted at the University of St Andrews.[9][10] This was the first time this conference was held in the United Kingdom, and around 350 international astronomers were in attendance.

As a member of the Science Advisory Board of the Leibniz Institute for Astrophysics Potsdam, she supports collaboration with other research institutes and advises on research and development programmes.[11]

Recently, Jardine has joined the editorial board of Living Reviews in Solar Physics as an associate editor.[12]

Jardine's research is summarised as:

"By studying solar-like stars and their impact on orbiting planets, Moira aims to understand the origins of our solar system and the conditions that allowed life to evolve on Earth. In particular, she studies the magnetic fields of stars, since these power both the hot, X-ray-emitting corona and the supersonic wind that together can ionise or erode a planet’s atmosphere. As inputs for her models, Moira uses both magnetic maps of stellar surfaces (derived from spectropolarimetry) and photometric observations from satellite missions. These data are coordinated through the international consortium MagICS".[3]

Jardine has taught courses focusing on magnetic fields and fluid dynamics.[13][14] As well as supervising PhD students and postdocs, she currently teaches AS1001 The Solar System, PH4031 Fluids and AS5002 Magnetofluids and Space Plasmas at the University of St Andrews.[15] 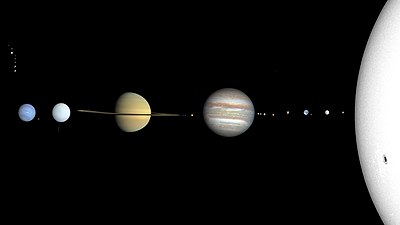 The Solar System is the gravitationally bound system of the Sun and the objects that orbit it. It formed 4.6 billion years ago from the gravitational collapse of a giant interstellar molecular cloud. The vast majority (99.86%) of the system's mass is in the Sun, with most of the remaining mass contained in the planet Jupiter. The four inner system planets—Mercury, Venus, Earth and Mars—are terrestrial planets, being composed primarily of rock and metal. The four giant planets of the outer system are substantially larger and more massive than the terrestrials. The two largest, Jupiter and Saturn, are gas giants, being composed mainly of hydrogen and helium; the next two, Uranus and Neptune, are ice giants, being composed mostly of volatile substances with relatively high melting points compared with hydrogen and helium, such as water, ammonia, and methane. All eight planets have nearly circular orbits that lie near the plane of Earth's orbit, called the ecliptic.

The Sun is the star at the center of the Solar System. It is a nearly perfect ball of hot plasma, heated to incandescence by nuclear fusion reactions in its core. The Sun radiates this energy mainly as light, ultraviolet, and infrared radiation, and is the most important source of energy for life on Earth.

Andrew Collier Cameron is a British astronomer specialising in the discovery and characterisation of exoplanets. He is a founding co-investigator of the WASP project and served as the head of the School of Physics and Astronomy of the University of St Andrews between 2012 and 2015 where he is currently a professor.

The University of Sussex is a public research university located in Falmer, East Sussex, England, it is mostly within the city boundaries of Brighton and Hove but extends into the Lewes District in its eastern fringe. Its large campus site is surrounded by the South Downs National Park and is around 5.5 kilometres (3.4 mi) from central Brighton. The university received its Royal Charter in August 1961, the first of the plate glass university generation, and was a founding member of the 1994 Group of research-intensive universities.

Leibniz Institute for Astrophysics Potsdam (AIP) is a German research institute. It is the successor of the Berlin Observatory founded in 1700 and of the Astrophysical Observatory Potsdam (AOP) founded in 1874. The latter was the world's first observatory to emphasize explicitly the research area of astrophysics. The AIP was founded in 1992, in a re-structuring following the German reunification.

Living Reviews in Solar Physics is a peer-reviewed open-access scientific journal publishing reviews on all areas of solar and heliospheric physics. It was founded and published at the Max Planck Institute for Solar System Research from 2004-2015. After it was sold by the Max Planck Society in June 2015, it is now published by the academic publisher Springer Science+Business Media.

In physics and engineering, fluid dynamics is a subdiscipline of fluid mechanics that describes the flow of fluids—liquids and gases. It has several subdisciplines, including aerodynamics and hydrodynamics. Fluid dynamics has a wide range of applications, including calculating forces and moments on aircraft, determining the mass flow rate of petroleum through pipelines, predicting weather patterns, understanding nebulae in interstellar space and modelling fission weapon detonation.

A postdoctoral fellow, postdoctoral researcher, or simply postdoc, is a person professionally conducting research after the completion of their doctoral studies. The ultimate goal of a postdoctoral research position is to pursue additional research, training, or teaching in order to have better skills to pursue a career in academia, research, or any other field. Postdocs often, but not always, have a temporary academic appointment, sometimes in preparation for an academic faculty position. They continue their studies or carry out research and further increase expertise in a specialist subject, including integrating a team and acquiring novel skills and research methods. Postdoctoral research is often considered essential while advancing the scholarly mission of the host institution; it is expected to produce relevant publications in peer-reviewed academic journals or conferences. In some countries, postdoctoral research may lead to further formal qualifications or certification, while in other countries, it does not.

The Royal Society of Edinburgh is Scotland's national academy of science and letters. It is a registered charity that operates on a wholly independent and non-partisan basis and provides public benefit throughout Scotland. It was established in 1783. As of 2021, there are around 1,800 Fellows.

Jardine was interviewed by the University of St Andrews Physics Society in 2016 to discuss life as an astronomer and the search for the perfect sky.[18] In this interview, she discusses her journey through academia, her family and other subjects.

She lives in St Andrews, with her husband Andrew Collier Cameron and their three children. The couple regularly collaborate, and have been known to teach each other's classes in case of emergencies, such as the early birth of their third child.[19]