Milan Stoilov as a medical cadet.

Macedonian is an Eastern South Slavic language. It is part of the Indo-European language family, and is one of the Slavic languages, which are part of a larger Balto-Slavic branch. Spoken as a first language by around two million people, it serves as the official language of North Macedonia. Most speakers can be found in the country and its diaspora, with a smaller number of speakers throughout the transnational region of Macedonia. Macedonian is also a recognized minority language in parts of Albania, Bosnia and Herzegovina, Romania, and Serbia and it is spoken by emigrant communities predominantly in Australia, Canada and the United States. 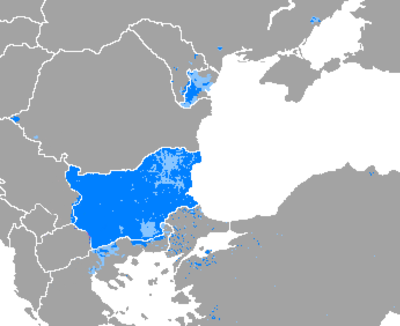 Bulgarian is an Eastern South Slavic language spoken in Southeastern Europe, primarily in Bulgaria. It is the language of the Bulgarians.

Macedonia is a geographical and historical region of the Balkan Peninsula in Southeast Europe. Its boundaries have changed considerably over time; however, it came to be defined as the modern geographical region by the mid 19th century. Today the region is considered to include parts of six Balkan countries: larger parts in Greece, North Macedonia, and Bulgaria, and smaller parts in Albania, Serbia, and Kosovo. It covers approximately 67,000 square kilometres (25,869 sq mi) and has a population of 4.76 million.

Bulgarians are a nation and South Slavic ethnic group native to Bulgaria and Southeast Europe.

Born in Kilkis in the then Ottoman Empire, Stoilov graduated from the town's Bulgarian primary school and junior high school in 1892 and in 1895, respectively.[5] In 1902, he graduated from the Bulgarian Theological Seminary in Constantinople.[2] He moved to Saint Petersburg Military Medical Academy to study medicine the same year.[6] In Saint Petersburg, he participated in the Secret Macedonian-Adrianople Circle, which was an offshoot of the Supreme Macedonian-Adrianople Committee.[7][8] Stoilov was a member of the Macedonian Scientific and Literary Society and served as its secretary. He was involved in its third official act of the Society, which included documenting minutes of its 29 December 1902 session. [9]

In the next year he left Russia to join the Ilinden Uprising against the Ottomans. In July 1903, he arrived in Sofia and presented himself as a volunteer at the Overseas Representation of the IMARO, from where he was assigned to a detachment going to Ottoman Macedonia under Nikola Dechev.[10] Stoilov became a head of a medical squad. He was killed in fighting in Orizari, near Kočani on 5 September 1903.[11][12][6] According to other reports, he was heavily wounded and captured by the Turks and died in prison in Kočani in 1904.[13] As a socialist-internationalist, he claimеd, he was not going to die for a certain nation or as a patriot, but as a revolutionary fighting for the good of the humanity.[14] 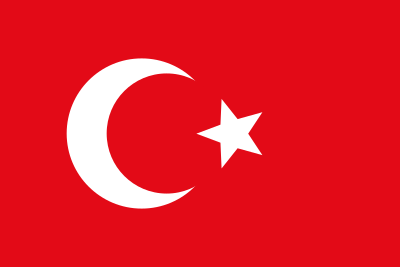 The Ottoman Empire, also known as the Turkish Empire, was an empire that controlled much of Southeast Europe, Western Asia, and Northern Africa between the 14th and early 20th centuries. It was founded at the end of the 13th century in northwestern Anatolia in the town of Söğüt by the Turkoman tribal leader Osman I. After 1354, the Ottomans crossed into Europe and, with the conquest of the Balkans, the Ottoman beylik was transformed into a transcontinental empire. The Ottomans ended the Byzantine Empire with the conquest of Constantinople in 1453 by Mehmed the Conqueror.

The S. M. Kirov Military Medical Academy is a higher education institution of military medicine in Saint Petersburg and the Russian Federation. Senior medical staff are trained for the Armed Forces and conduct research in military medical services.

The Secret Macedonian-Adrianople Circle was founded in St. Petersburg in 1900. Members of it were Bulgarian students in the Russian Empire. Its purpose, according to its founding protocol, was: "To support the Macedonian cause materially and morally and, according to its capabilities, to monitor its development." One of the founders of the circle was Krste Misirkov, who, when he moved to St. Petersburg in 1902, became also its chairman. The circle was in direct contacts with the Supreme Macedonian-Adrianople Committee in Bulgaria, to which it reported on its activities. Misirkov presented his motives for the creation of the circle to the chairman of the Supreme Macedonian-Adrianople Committee in Sofia as follows: "It is known that there is no Bulgarian who is not interested in the situation and fate of that part of our fatherland, which to this day groans under the yoke of Turkey." In the period 1902-1903, the circle contacted with the Central Committee of the Internal Macedonian Adrianople Revolutionary Organization. Subsequently, the circle grew into the Macedonian-Adrianople Student Society, with its divisions opening in different cities in Russia, where Bulgarian students attended. The club existed until 1906, after which it finally merged with the All-Bulgarian Student Association, ceasing its independent activity. 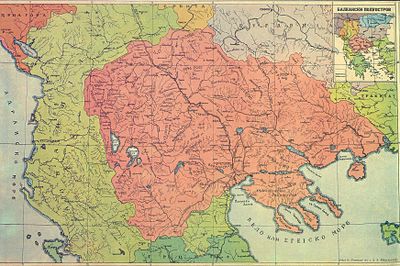 The Macedonian Scientific and Literary Society, sometimes called Slavic-Macedonian Scholarly and Literary Society was an organization of Macedonian Slavs in Russia in the first decades of the twentieth century. Its aim was the creation of an independent Macedonia, encompassing the entire geographic region of Macedonia, according to maps drawn by the society itself. Its founders were Dimitrija Čupovski and his brother Nace Dimov. Other founders include Stefan Dedov and Dijamandija Mišajkov. The organization's secretary was Milan Stoilov, a medical student in Saint Petersburg.

The Ilinden–Preobrazhenie Uprising, or simply the Ilinden Uprising of August - October 1903, was an organized revolt against the Ottoman Empire, which was prepared and carried out by the Internal Macedonian-Adrianople Revolutionary Organization, with the support of the Supreme Macedonian-Adrianople Committee. The name of the uprising refers to Ilinden, a name for Elijah's day, and to Preobrazhenie which means Transfiguration. Some historians describe the rebellion in the Serres revolutionary district as a separate uprising, calling it the Krastovden Uprising, because on September 14 the revolutionaries there also rebelled. The revolt lasted from the beginning of August to the end of October and covered a vast territory from the eastern Black Sea coast to the shores of Lake Ohrid.

The Foreign Representation was an organizational institution of the Internal Macedonian Revolutionary Organization (IMRO). It was established in Ottoman Thessaloniki at the Congress of the IMRO in 1896. Its aim was to keep in touch the Central Committee there with the foreign representatives in Sofia, through who to inform the Bulgarian authorities about the situation in the region of Macedonia and Adrianople Thrace. The office was responsible to build and manage the illegal border crossings from Bulgaria to the Ottoman Empire for the transfer of weapons, munitions, money and literature. Its task was also to maintain contacts with the Supreme Macedonian Committee and with the Bulgarian society, and to seek support for the Liberation movement. In addition to this activity, the foreign representatives were obliged to maintain contacts with the diplomatic representatives in Bulgaria and to inform them about the situation in Macedonia and Adrianople areas. This Institution was set up in Sofia, and acted in parallel with the Central Committee until 1924. The representatives were appointed by the CC. This institution was closed at the IMRO Congress in Simitli in 1928.

Nikola Dechev was a Bulgarian revolutionary, a member of the Internal Macedonian Revolutionary Organization, leader of several detachments active in the region of the town of Veles, Macedonia.

Kočani is a town in the eastern part of North Macedonia, situated around 100 kilometres (62 mi) east from Skopje. It has a population of 28,330 and is the seat of the Kočani Municipality. 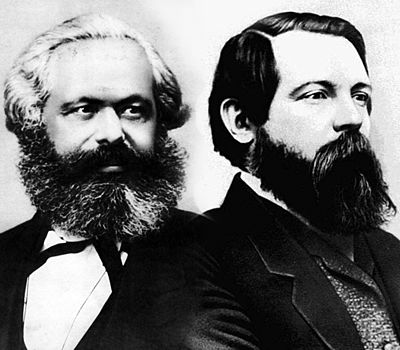 Proletarian internationalism, sometimes referred to as international socialism, is the perception of all communist revolutions as being part of a single global class struggle rather than separate localized events. It is based on the theory that capitalism is a world-system and therefore the working classes of all nations must act in concert if they are to replace it with communism.

Bulgarian is an Eastern South Slavic language spoken in Southeastern Europe, primarily in Bulgaria. It is the language of the Bulgarians. 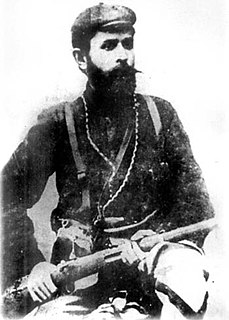 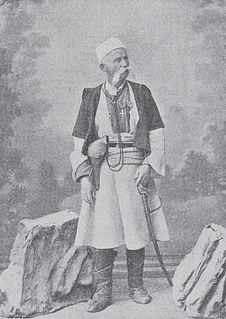 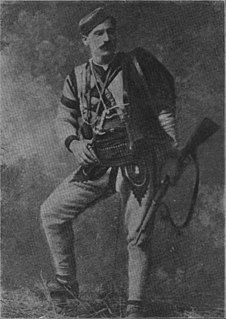 Folk Songs of the Macedonian Bulgarians 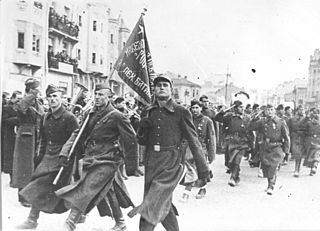