Association football, more commonly known as football or soccer, is a team sport played between two teams of 11 players who primarily use their feet to propel the ball around a rectangular field called a pitch. The objective of the game is to score more goals than the opposition by moving the ball beyond the goal line into a rectangular framed goal defended by the opposing side. Traditionally, the game has been played over two 45 minute halves, for a total match time of 90 minutes. With an estimated 250 million players active in over 200 countries, it is considered the world's most popular sport. 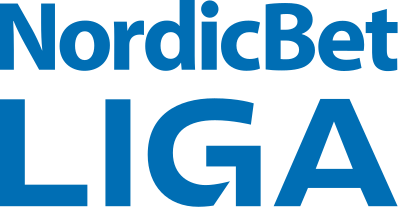 Hobro Idræts Klub is a professional association football club based in the town of Hobro, Denmark, that competes in the 1st Division, the second tier of the Danish football league system. 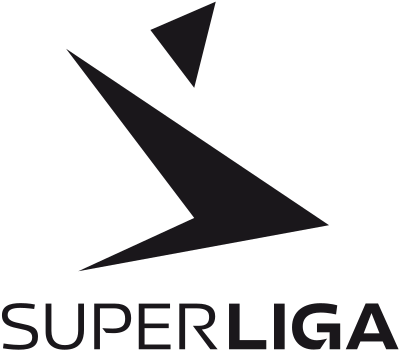 Esbjerg forenede Boldklubber is a Danish professional football club based in Esbjerg, West Jutland, that plays in the 2nd division, the third-tier of the Danish football league system. Founded in 1924 as a merger between Esbjerg Boldklub af 1898 and Esbjerg Amatørklub af 1911, the first team play their home games at Blue Water Arena which has been the club's home ground since its opening in 1955.

Odense Boldklub is a Danish professional football club based in the city Odense. The club has won three Danish championships and five Danish Cup trophies. OB play in the Danish Superliga and their home field is Nature Energy Park. OB's clubhouse is located in Ådalen near Odense River.

Randers FC is a professional football club based in Randers, East Jutland, Denmark, that plays in the Danish Superliga, the top flight of the Danish football league system. Founded on 1 January 2003, the club builds upon the license of Randers Freja, a former three-time Danish Cup winning team. As of 2022 the club had won the Danish Cup twice in its history. Randers plays its matches at the 10,300-capacity Cepheus Park Randers.

AaB, internationally referred to as Aalborg BK, or sometimes also known as AaB Aalborg, is a professional football team located in Aalborg. The club is represented in the Danish Superliga and has won four Danish football Championships and three Danish Cup trophies. Most recently the team won the double in 2014.

The Danish Cup is the official "knockout" cup competition in Danish football, run by the Danish Football Association. The cup has been contested annually since 1955.

Jensen began his career with local amateur club Korup near Odense, before moving to nearby top-flight Superliga club Odense Boldklub (OB) in 1996, where he served as an understudy to Danish international keeper Lars Høgh.[3] He moved on to lower-league club Randers Freja, and played almost 100 games for Freja from 1998 to 2000, helping the team win promotion for the second-tier Danish 1st Division.[4]

Jensen joined rival Danish 1st Division team Esbjerg fB in the Winter 2000, and eventually surpassed Benny Gall as the starting goalkeeper.[5] Jensen helped Esbjerg win promotion to the Danish Superliga, and played all 33 games as Esbjerg finished 7th in the 2001–02 Danish Superliga season. In winter 2002, Esbjerg brought in new keeper Lars Winde. When Jensen made his dissatisfaction known, he was handed a free transfer,[6] and rejoined with OB in January 2003, signing a two-year contract.[3]

At OB, Jensen initially served as the understudy once more, this time to Det Gyldne Bur-winning goalkeeper Karim Zaza. When Zaza was sold in the Summer 2003, Jensen was handed a place in the starting line-up which he kept for 18 games. In winter 2003, OB bought a new Det Gyldne Bur-winning keeper in Arek Onyszko, and Jensen was demoted to the bench. In July 2004, Jensen announced his desire to let his OB contract expire at the end of the year 2004, as he had already agreed to join newly promoted team Randers FC, a club merger based on his former team Randers Freja.[4] In August 2004, OB and Randers agreed on a transfer move, allowing Jensen to immediately join Randers.[7]

At Randers, Jensen quickly established himself as the starting goalkeeper ahead of Christian Kemph. The season did not end well for Jensen, as Randers were relegated to the Danish 1st Division. As a 1st Division team, Randers and Jensen managed to win the 2005–06 Danish Cup, beating Superliga club Esbjerg fB 1–0 in extra time in the final.[8] That same season, Randers won promotion for the Superliga, and Jensen signed a two-year contract extension in June 2006.[9] In the following 2006–07 Danish Superliga season, Jensen missed only a single game (through suspension), as Randers finished eighth. When Randers signed Kevin Stuhr Ellegaard as their new starting goalkeeper in the 2007 summer transfer window, Jensen was not allowed to train with the first team, but was instead demoted to the youth team.[10] Following a public dispute with Randers due to what Jensen contested as unfair treatment, he was released from all contractual obligations with the club on 16 July 2007.[11]

Jensen soon after chose to join AaB Aalborg, signing a half-year contract with the club. He was brought in as a backup keeper, as AaB's newly bought first choice Karim Zaza was still recovering from a shoulder operation.[12] Jensen was AaB's starting goalkeeper in the first seven games of the 2007–08 Danish Superliga season, including a 5–0 defeat to his former team Randers FC, and he also helped AaB beat Gent to advance to the 2007–08 UEFA Cup.[13] When Zaza returned to fitness in September 2007, Jensen found himself as the second choice keeper for the Superliga games, but saw playing time in the Danish Cup tournament instead.[2] In his six months at AaB, Jensen played 12 matches in all competitions for the club, in a season that would ultimately lead to AaB winning the Danish Superliga title in May 2008. By then, Jensen had already moved on.

In January 2008, he joined Skive IK in the Danish 1st Division as goalkeeper and assistant manager on a two-year contract. He had already agreed an extended contract with AaB, but AaB chose not to stop his dreams of gaining manager experience.[14] Jensen stated that "I helped them out in a situation, as they help me in this situation".[15] but he decided to end his career both as a player and manager.[16] 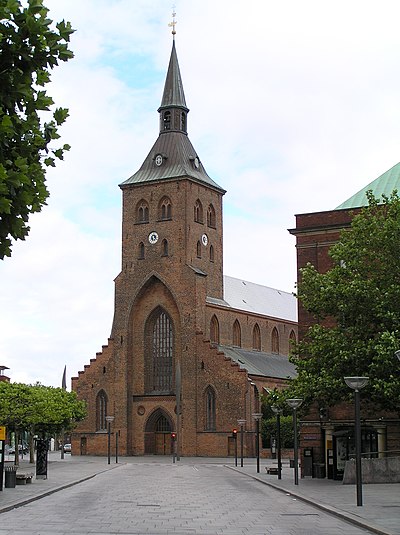 The Denmark men’s national football team represents Denmark in men's international football competitions. It is controlled by the Danish Football Association (DBU), the governing body for the football clubs which are organised under DBU. Denmark's home stadium is Parken Stadium in the Østerbro district of Copenhagen; their head coach is Kasper Hjulmand.

Poul Lars Høgh-Pedersen was a Danish footballer, who played his entire career as a goalkeeper for Odense BK. He won three Danish football championships and three Danish Cup trophies with OB, and won the Danish Best Goalkeeper of the Year award five times. He played eight matches for the Denmark national team, and was selected for the 1986 World Cup and 1996 European Championship squads. He was a part of the Danish team which won the 1995 King Fahd Cup.

Esbjerg forenede Boldklubber is a Danish professional football club based in Esbjerg, West Jutland, that plays in the 2nd division, the third-tier of the Danish football league system. Founded in 1924 as a merger between Esbjerg Boldklub af 1898 and Esbjerg Amatørklub af 1911, the first team play their home games at Blue Water Arena which has been the club's home ground since its opening in 1955.

Benny Gall is a Danish former footballer who played as a goalkeeper, and the current head coach of fourth tier Denmark Series club BK Avarta.

Det Gyldne Bur is an award given to the best goalkeeper in Danish football each year. The winner is found by votes among the goalkeepers in the two top divisions of Danish football; the Danish Superliga and Danish 1st Division. The award has been handed out by Danish sports paper TIPS-Bladet since 1984.

Jensen was goalkeeping coach for Hobro IK from 2014 until 2017, where he chose to focus on a civil career.[17]

The Danish Cup is the official "knockout" cup competition in Danish football, run by the Danish Football Association. The cup has been contested annually since 1955. 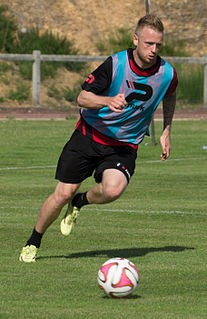