Kenaston (2016 population: 282) is a village in the Canadian province of Saskatchewan within the Rural Municipality of McCraney No. 282 and Census Division No. 11. Kenaston is located on Highway 11 (Louis Riel Trail) at the junction of Highway 15 and is also near Highway 19. This is a scenic area of Saskatchewan situated within the rolling Allan Hills. Kenaston is located between Danielson Provincial Park and Blackstrap Provincial Park. 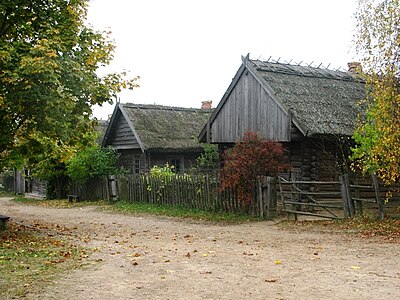 A village is a clustered human settlement or community, larger than a hamlet but smaller than a town, with a population typically ranging from a few hundred to a few thousand. Though villages are often located in rural areas, the term urban village is also applied to certain urban neighborhoods. Villages are normally permanent, with fixed dwellings; however, transient villages can occur. Further, the dwellings of a village are fairly close to one another, not scattered broadly over the landscape, as a dispersed settlement.

Provinces and territories of Canada

Provinces and territories of Canada

Within the geographical areas of Canada, the ten provinces and three territories are sub-national administrative divisions under the jurisdiction of the Canadian Constitution. In the 1867 Canadian Confederation, three provinces of British North America—New Brunswick, Nova Scotia, and the Province of Canada —united to form a federation, becoming a fully independent country over the next century. Over its history, Canada's international borders have changed several times as it has added territories and provinces, making it the world's second-largest country by area.

Saskatchewan is a province in western Canada, bordered on the west by Alberta, on the north by the Northwest Territories, on the east by Manitoba, to the northeast by Nunavut, and on the south by the U.S. states of Montana and North Dakota. Saskatchewan and Alberta are the only landlocked provinces of Canada. In 2022, Saskatchewan's population was estimated at 1,194,803. Nearly 10% of Saskatchewan’s total area of 651,900 square kilometres (251,700 sq mi) is fresh water, mostly rivers, reservoirs and lakes. 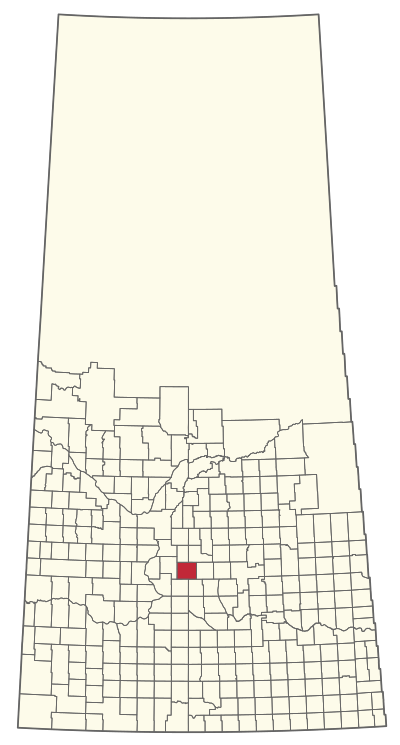 The Rural Municipality of McCraney No. 282 is a rural municipality (RM) in the Canadian province of Saskatchewan within Census Division No. 11 and SARM Division No. 5. It is located in the south-central portion of the province.

Division No. 11 is one of eighteen census divisions in the province of Saskatchewan, Canada, as defined by Statistics Canada. It is located in the central part of the province and includes the largest city in the province, Saskatoon.

Highway 11 is a major north-south highway in Saskatchewan, Canada that connects the province's three largest cities: Regina, Saskatoon and Prince Albert. It is a structural pavement major arterial highway which is approximately 391 kilometres (243 mi) long. It is also known as the Louis Riel Trail (LRT) after the 19th century Métis leader. It runs from Highway 1 in Regina until Highway 2 south of Prince Albert. Historically the southern portion between Regina and Saskatoon was Provincial Highway 11, and followed the Dominion Survey lines on the square, and the northern portion between Saskatoon and Prince Albert was Provincial Highway 12. 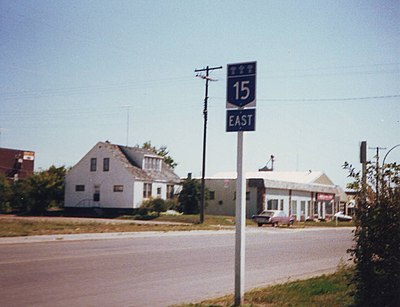 Danielson Provincial Park is located at the northern end of Lake Diefenbaker in the southern part of the Canadian province of Saskatchewan. The park surrounds the Gardiner Dam, which was built in 1967 and is among the largest embankment dams in Canada and the world. The South Saskatchewan River flows north beyond the park, towards Outlook and Saskatoon. Saskatchewan Highways 44, 45, and 219 provide access to the park. SaskPower's Coteau Creek Hydroelectric Station is located near the park.

Blackstrap Provincial Park is a provincial park in the Canadian province of Saskatchewan in the RM of Dundurn. Prior to the park's establishment in 1986, it was a provincial recreation site. The park runs along the eastern shore of Blackstrap Lake and consists of a conservation area, campground, beaches, Mount Blackstrap, cross country ski trails, biking and hiking trails, and several picnicking areas. It is located at LSD 32-3 W3, east of Dundurn and accessed via Highway 211. Mount Blackstrap is a man-made mountain built as a ski hill for the 1971 Canada Winter Games. It continued to operated as a ski hill until 2007.

First known as Bonnington Springs in the District of Assiniboia in the Northwest Territories, the settlement was usually referred to as "Bonnington". In late 1905, when Saskatchewan became a province, the name was changed to "Kenaston", honouring F.E. Kenaston, who was the Vice President of the Saskatchewan Valley Land Company.[5][6] The railroad reached Bonnington in late 1889, but there is no record of any permanent residents until 1902. In that year the Saskatchewan Valley Land Company was formed made up of wealthy men from the United States.[7] The president was Colonel Andrew Duncan Davidson[8] and F. E. Kenaston was vice-president.

The Saskatchewan Valley Land Company purchased 839,000 acres (3,400 km2) of land from the railway for $1.53 an acre and another 250,000 acres (1,000 km2) from the Dominion Government for $1.00 an acre. By adopting spectacular methods of advertising and employing dozens of land agents, the wide open spaces between Regina and Saskatoon were peopled with hundreds of settlers in the time between 1902 and 1910.

Needs of settlers created a necessity for business places and the settlement grew. Kenaston incorporated as a village on July 18, 1910.[9] The Kenaston School opened its doors to its first fourteen pupils in August 1905, while the town was still officially known as Bonnington. The first store was built in 1903, the post office and hotel were established in 1904, the first telephone installed in 1909, and the first of Kenaston's grain elevator was built in 1906 by the Canadian Elevator Company. In 1910, the 40,000 gallon water tower was built by CNR in proximity to the train station and just across from the first hotel.

Statistics Canada, formed in 1971, is the agency of the Government of Canada commissioned with producing statistics to help better understand Canada, its population, resources, economy, society, and culture. It is headquartered in Ottawa.

The 2016 Canadian census was an enumeration of Canadian residents, which counted a population of 35,151,728, a 5% change from its 2011 population of 33,476,688. The census, conducted by Statistics Canada, was Canada's seventh quinquennial census. The official census day was May 10, 2016. Census web access codes began arriving in the mail on May 2, 2016. The 2016 census marked the reinstatement of the mandatory long-form census, which had been dropped in favour of the voluntary National Household Survey for the 2011 census. With a response rate of 98.4%, this census is said to be the best one ever recorded since the 1666 census of New France. This census was succeeded by Canada's 2021 census.

Kenaston hosts a sporting facility named Kenaston Place which brings to the village the event Super Draft. Kenaston Snowman Park is near the historic water tower restoration. Kenaston's large roadside attraction is a Snowman which is 18 Feet (5.5 Metres) in height and honours the nickname of Kenaston being the Blizzard capital of Saskatchewan. Bonnington Springs is the name of the campground at Kenaston. Kenaston Recreation Site is a conservation area near Kenaston at 17-29-2-W3.[14][15][16]

Kenaston is part of the Sun West School Division. It's also Home to the Distance Learning Center which provides education to the province through online studies.

Canadian National Railway currently serves Kenaston; however the line terminates at Davidson where the Last Mountain Railway (Craik subdivision) begins and takes over the remainder of the line.[17][18]

Allan Edward Joseph Kerpan is a Canadian politician. He is the current interim deputy leader of the Maverick Party, a right-wing Western Canadian separatist party. 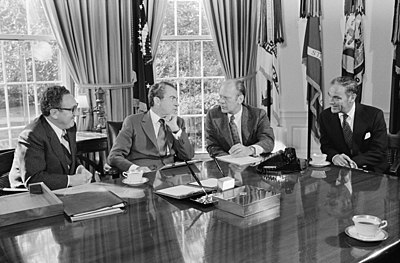 A politician is a person active in party politics, or a person holding or seeking an elected office in government. Politicians propose, support, reject and create laws that govern the land and by extension its people. Broadly speaking, a politician can be anyone who seeks to achieve political power in a government.

Mike Prpich is a Canadian professional ice hockey player of Croatian ancestry. He plays both wing positions and is currently a member of the Kenaston Blizzard who play in the Sask Valley Hockey League

Lynne Yelich, is a Canadian politician and was the Conservative MP for the former riding of Blackstrap and predecessor riding components, from 2000 to 2015.

Blackstrap was a federal electoral district in Saskatchewan, Canada, that had been represented in the House of Commons of Canada since 1997. It is named for Blackstrap Lake. The riding was abolished prior to the 2015 Canadian federal election.

Rural Municipality of Arm River No. 252 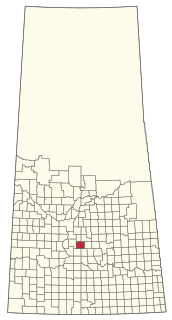 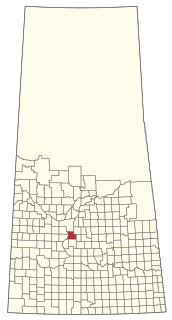 Rural Municipality of Dundurn No. 314

Rural Municipality of Lost River No. 313 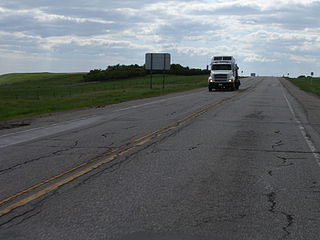 Rural Municipality of Rosedale No. 283

Rural Municipality of Fillmore No. 96