From 1973-1978, he studied English and German philology in Minsk, after which he worked for a year at a primary school near Ashmyany in Belarus. After returning to Lithuania, he worked on the editorial staff of the daily Czerwony Sztandar (1979-1989). Initially a translator there, he later became a correspondent and head of department.[1] In 1990, he was co-founder and co-publisher of the Polish biweekly Magazyn Wileński, with which he worked until 1997.[1] In 1991, he became co-founder and co-owner of the Polish Publishing House in Vilnius.

He was one of the creators and first chairman of the Socio-Cultural Association of Poles in Lithuania, which was established on May 5, 1988.[2] When Sąjūdis seted up Lithuanian International Coordinatory Association in order to deal with ethnic minority matters, Sienkiewicz was representing SSKPL, together with Artur Płokszto, until they left it in May 1989.[3] At the SSKPL's first congress on 15-16 April 1989, Jan Sienkiewicz proposed its transformation into a new organisation, in order to avoid accusations that a cultural organisation is engaging in political activities. The proposal was accepted, and the association has withdrawn from the Lithuanian Cultural Fund and transformed into the Union of Poles in Lithuania. Sienkiewicz became a chairman of the new organisation.[4] At the Union's Third Congress on December 14, 1991, he did not seek election for another term, his place was taken by Jan Mincewicz.[5]

In 1994, he was one of the co-founders of the Polish political party in Lithuania – Electoral Action of Poles in Lithuania (EAPL). He was the first chairman of this party. From 1995 to 1997, he was a member of the Vilnius City Council. On March 23, 1997 he was elected member of parliament for the Vilnius-Solečniki district, getting 84% of all votes cast.[6] In the Seimas, he joined the Independent Faction. He also became a member of the Committee for Human and Civil Rights and National Affairs.[6] In March 1998, the Lithuanian Parliament's Ethics and Procedures Committee has punished Jan Sienkiewicz for holding a press conference for Polish journalists in Polish at the parliament building.[7] He held his mandate until October 10, 2000, and resigned from running in the next election and withdrew from politics.[8] On May 27, 2000, he was re-elected chairman of the Union of Poles in Lithuania, and he held this position until his resignation on June 21, 2001.[9]

He is the author of approximately 900 articles published in the Polish press in Lithuania, texts concerning mainly Polish issues. He is a regular columnist in Kurier Wileński. His articles written during the period of his chairmanship of the organisation of Lithuanian Poles and his mandate as a member of parliament have been published in the form of two anthologies. He is the author or editor of several books, among them Michał Römer diaries. He has also been involved in the documentation of cemeteries in Lithuania, registering the Polish graves there. 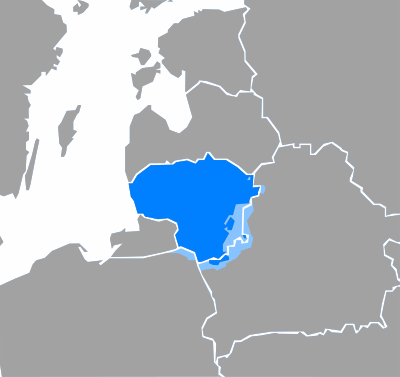 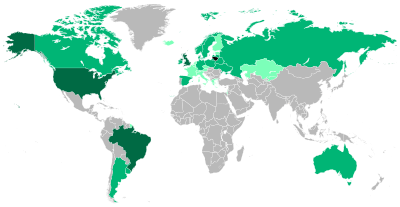 Lithuanians are a Baltic ethnic group. They are native to Lithuania, where they number around 2,378,118 people. Another million or two make up the Lithuanian diaspora, largely found in countries such as the United States, United Kingdom, Brazil, Russia, and Canada. Their native language is Lithuanian, one of only two surviving members of the Baltic language family along with Latvian. According to the census conducted in 2021, 84.6% of the population of Lithuania identified themselves as Lithuanians, 6.5% as Poles, 5.0% as Russians, 1.0% as Belarusians, and 1.1% as members of other ethnic groups. Most Lithuanians belong to the Catholic Church, while the Lietuvininkai who lived in the northern part of East Prussia prior to World War II, were mostly Lutherans.

Poles, or Polish people, are a West Slavic nation and ethnic group, who share a common history, culture, the Polish language and are identified with the country of Poland in Central Europe. The preamble to the Constitution of the Republic of Poland defines the Polish nation as comprising all the citizens of Poland, regardless of heritage or ethnicity. The majority of Poles adhere to Roman Catholicism.

The Poles in Lithuania, estimated at 183,000 people in the Lithuanian census of 2021 or 6.5% of Lithuania's total population, are the country's largest ethnic minority.

The Seimas of the Republic of Lithuania, or simply the Seimas, is the unicameral parliament of Lithuania. The Seimas constitutes the legislative branch of government in Lithuania, enacting laws and amendments to the Constitution, passing the budget, confirming the Prime Minister and the Government and controlling their activities. 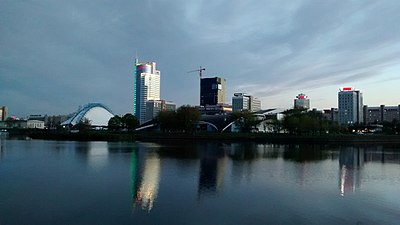 Minsk is the capital and the largest city of Belarus, located on the Svislach and the now subterranean Niamiha rivers. As the capital, Minsk has a special administrative status in Belarus and is the administrative centre of Minsk Region (voblast) and Minsk District (raion). As of January 2021, its population was 2 million, making Minsk the 11th most populous city in Europe. Minsk is one of the administrative capitals of the Commonwealth of Independent States (CIS) and the Eurasian Economic Union (EAEU).

Ashmyany is a town in Grodno Region, Belarus, located at 50 km from Vilnius. The town is Ashmyany District's capital. It lies in Ashmyanka's river basin. 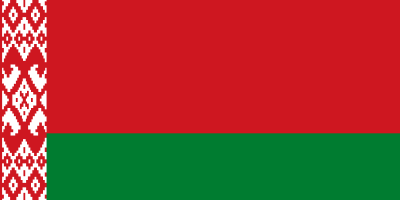 Belarus, officially the Republic of Belarus, is a landlocked country in Eastern Europe. It is bordered by Russia to the east and northeast, Ukraine to the south, Poland to the west, and Lithuania and Latvia to the northwest. Covering an area of 207,600 square kilometres (80,200 sq mi) and with a population of 9.2 million, Belarus is the 13th-largest and the 20th-most populous country in Europe. The country has a hemiboreal climate and is administratively divided into seven regions. Minsk is the capital and largest city.

Sąjūdis, initially known as the Reform Movement of Lithuania, is the political organisation which led the struggle for Lithuanian independence in the late 1980s and early 1990s. It was established on 3 June 1988, and was led by Vytautas Landsbergis. Its goal was to seek the return of independent status for Lithuania.

Electoral Action of Poles in Lithuania – Christian Families Alliance or EAPL–CFA is a political party in Lithuania. It represents the Polish minority and positions itself as Christian-democratic. It has three seats in the Seimas, one seat in the European Parliament, and six seats in coalition with the Russian Alliance in the Vilnius City Municipality after the 2019 local election.

Kurier Wileński is the main Polish-language newspaper in Lithuania. Printed in Vilnius, it is the only Polish-language daily newspaper published east of Poland. A direct descendant of both the 19th-century newspaper of the same name and the Czerwony Sztandar newspaper, created by the Soviet authorities in 1953 as a means of Sovietization of the Polish diaspora left in the Polish areas annexed by the Soviet Union. The newspaper is a member of the European Association of Daily Newspapers in Minority and Regional Languages (MIDAS). According to TNS Gallup media research, Kurier Wileński 36,800 people or 1.4% of Lithuania's population read at least one issue out of the last six in summer 2008, but that measure dropped to 0.3% in spring 2010. 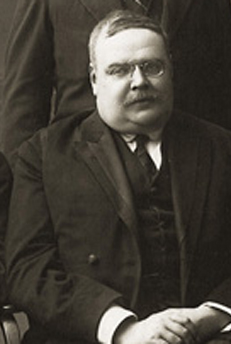 Michał Pius Römer was a Lithuanian-Polish lawyer, scientist and politician.