Sauro was born July 19, 1960 in Dyfed, Wales. He grew up in the village of Llangolman in Pembrokeshire and attended the welsh comprehensive school Ysgol y Preseli.[1]

After obtaining a B.Sc. in biochemistry with microbiology at the University of Canterbury and an M.Sc. in biological computing at the University of York, Sauro moved to Oxford Brookes University for his Ph.D. (1986) under the direction of David Fell, for a thesis entitled Control analysis and simulation of metabolism, work that led to several publications, including one in which new relationships between elasticities and control coefficients were described.[2] Subsequently he obtained a teaching degree at the University of Aberystwyth.

The University of York is a collegiate research university, located in the city of York, England. Established in 1963, the university has expanded to more than thirty departments and centres, covering a wide range of subjects.

Oxford Brookes University is a public university in Oxford, England. It is a new university, having received university status through the Further and Higher Education Act 1992. The university was named after its first principal, John Henry Brookes, who played a major role in the development of the institution.

David A. Fell is a British biochemist and professor of systems biology at Oxford Brookes University. He has published over 200 publications, including a textbook on "Understanding the control of metabolism" in 1996.

Sauro carried out post-doctoral research at the University of Edinburgh in association with Henrik Kacser, when he worked on time-dependent systems[3] and enzyme-enzyme interactions.[4][5]

While a student at Oxford Sauro wrote a program called SCAMP for modelling metabolic systems,[6] later developed as Jarnac[7] and incorporated in his Systems Biology Workbench.[8]

Together with Hamid Bolouri, Andrew Finney and Michael Hucka he was a member of the development team for the creation of SBML (the Systems Biology Mark-up language),[9] which has become a major influence on the subject.[10]

Sauro is the author of books on metabolic control analysis,[11] enzyme kinetics,[12] and Laplace transforms,[13]

After some years, first at Caltech, then at the Keck Graduate Institute (Claremont, California), Sauro moved to the University of Washington as an Associate professor.[14]

Keck Graduate Institute (KGI) is a private graduate school in Claremont, California. Founded by Henry Riggs in 1997, it is the seventh and newest member of the Claremont Colleges.

Claremont is a suburban city on the eastern edge of Los Angeles County, California, United States, 30 miles (48 km) east of downtown Los Angeles. It is in the Pomona Valley, at the foothills of the San Gabriel Mountains. As of the 2010 census it had a population of 34,926, and in 2019 the estimated population was 36,266.

The University of Washington is a public research university in Seattle, Washington. 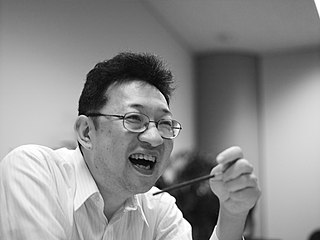