Spanish is a Romance language of the Indo-European language family that evolved from colloquial Latin spoken on the Iberian Peninsula. Today, it is a global language with more than 500 million native speakers, mainly in the Americas and Spain. Spanish is the official language of 20 countries. It is the world's second-most spoken native language after Mandarin Chinese; the world's fourth-most spoken language overall after English, Mandarin Chinese, and Hindustani (Hindi-Urdu); and the world's most widely spoken Romance language. The largest population of native speakers is in Mexico.

Burgos is a city in Spain located in the autonomous community of Castile and León. It is the capital and most populated municipality of the province of Burgos.

The Caliphate of Córdoba, also known as the Cordoban Caliphate was an Islamic state ruled by the Umayyad dynasty from 929 to 1031. Its territory comprised Iberia and parts of North Africa, with its capital in Córdoba. It succeeded the Emirate of Córdoba upon the self-proclamation of Umayyad emir Abd ar-Rahman III as caliph in January 929. The period was characterized by an expansion of trade and culture, and saw the construction of masterpieces of al-Andalus architecture.

The son of Count Fernán González and Queen Sancha Sánchez of Pamplona, in 970 he succeeded his father as Count of Castile. He continued to recognise the suzerainty of the Kingdom of León, even though he was practically autonomous. In order to expand his frontiers at the expense of the Moors, in 974 he expanded the social base of the nobility by promulgating decrees stating that any villein of Castrojeriz who equipped a knight for battle would enter the ranks of the nobility. He was succeeded by his son, Sancho I of Castile.

Fernán González was the first autonomous count of Castile. Fernán González was a colourful character of legendary status in Iberia, and founder of the dynasty that would rule a semi-autonomous Castile, laying the foundations for its status as an independent kingdom. In the year 930, Fernán's name appears with the title of count inside the administrative organization of the eastern Kingdom of León.

The Kingdom of León was an independent kingdom situated in the northwest region of the Iberian Peninsula. It was founded in 910 when the Christian princes of Asturias along the northern coast of the peninsula shifted their capital from Oviedo to the city of León. The kings of León fought civil wars, wars against neighbouring kingdoms, and campaigns to repel invasions by both the Moors and the Vikings, all in order to protect their kingdom's changing fortunes.

The term Moor, derived from the ancient Mauri, is an exonym first used by Christian Europeans to designate the Muslim inhabitants of the Maghreb, the Iberian Peninsula, Sicily and Malta during the Middle Ages. 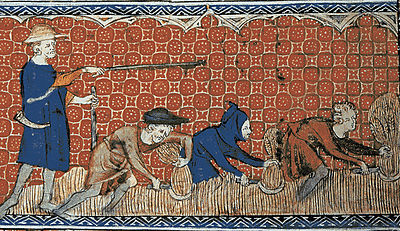 A villein is a class of serf tied to the land under the feudal system. As part of the contract with the lord of the manor, they were expected to spend some of their time working on the lord's fields in return for land. Villeins existed under a number of legal restrictions that differentiated them from freemen, and could not leave without his lord's permission. Generally, villeins held their status not by birth but by the land they held, and it was also possible for them to gain manumission from their lords. The villeinage system largely died out in England in 1500, with some forms of villeinage being in use in France until 1789.

The County of Ribagorza or Ribagorça was a medieval county on the southern side of the Pyrenees, including the northeast of modern Aragón and part of the northwest of modern Catalonia, both in Spain. It was originally the independent creation of a local dynasty, later absorbed into the Kingdom of Navarre and then into the Crown of Aragon. It had a strong historical connection with the neighboring counties of Sobrarbe and Pallars. Its territory consisted of the valleys of the rivers Ésera, Isábena, and Noguera Ribagorzana. The seat of its counts was at Benabarre. Other notable towns include Benasque, Graus and Pont de Suert. Today the western portion of the county roughly corresponds to the Aragonese comarca of Ribagorza, with its administrative centre in Graus; the eastern portion roughly corresponds to the Catalan comarca of Alta Ribagorça.

The County of Pallars Jussà or Lower Pallars was a county in the Hispanic March during the eleventh and twelfth centuries, long after the march had ceased to be effectively administered by the Kings of France. It was a division of the County of Pallars, which had been de facto, and possible de jure, independent since the late ninth century. It roughly corresponded with the modern Catalan comarca of Pallars Jussà.

Muniadona of Castile, also called Mayor or Munia, was Queen of Pamplona by her marriage with King Sancho Garcés III, who later added to his domains the Counties of Ribagorza (1017) and Castile (1028) using her dynastic rights to these territories.

Sancho Garcés III, also known as Sancho the Great, was the King of Pamplona from 1004 until his death in 1035. He also ruled the County of Aragon and by marriage the counties of Castile, Álava and Monzón. He later added the counties of Sobrarbe (1015), Ribagorza (1018) and Cea (1030), and would intervene in the Kingdom of León, taking its eponymous capital city in 1034.

Sancho García, called of the Good Laws, was the count of Castile and Álava from 995 to his death.

Covarrubias is a village and municipality in the province of Burgos in the Spanish autonomous community of Castile and León. It has 640 inhabitants, and it is near to Mecerreyes, Cubillo del Campo and Hortigüela. Covarrubias is situated in the valley of the river Arlanza, which is extensively wooded with among other species Spanish Juniper. Part of the area belonging to the municipality is included within a Special Protection Area for bird-life such as vultures.

The House of Lara is a noble family from the medieval Kingdom of Castile. Two of its branches, the Duques de Nájera and the Marquesado de Aguilar de Campoo were considered Grandees of Spain. The Lara family gained numerous territories in Castile, León, Andalucía, and Galicia and members of the family moved throughout the former Spanish colonies, establishing branches as far away as the Philippines and Argentina.

Bermudo II, called the Gouty, was first a rival king in Galicia (982–984) and then king of the entire Kingdom of León (984–999). His reign is summed up by Justo Pérez de Urbel's description of him as "the poor king tormented in life by the sword of Almanzor and in death by the vengeful pen of a bishop," Pelagius of Oviedo, half of whose Chronicon covers the reign of Bermudo and is highly critical of the king. He accuses Bermudo of imprisoning Bishop Gudesteus of Oviedo in the 990s and blames the attacks of Almanzor on Bermudo's sins.

Cillaperlata is a municipality located in the province of Burgos, Castile and León, Spain. According to the 2004 census (INE), the municipality has a population of 44 inhabitants.

The Monastery of San Salvador was a Benedictine monastery in the town of Oña, in the province of Burgos, central Spain, founded in 1011, which lasted until the 19th century.

García plays a role in two legends regarding medieval Castile. These are set during his rule and incorporate aspects of authentic history, but are mostly fictional in nature. In the Cantar de los Siete Infantes de Lara, Count García plays a minor role, trying unsuccessfully to impose a rapprochement between the two antagonistic families, those of Ruy Velázquez and his wife Doña Lambra, said to be a cousin of García, and Gonzalo Gustoz and his wife Sancha. This proves unsuccessful when a further provocation leads to cycles of escalating retribution.[9] His role in a second legend is more substantial. La condesa traidora (The treasonous countess), tells of the wife of García was enticed by Almanzor, ruler of Córdoba, to aspire to become his wife rather than that of a less powerful count. She plots up her husband's death, by providing his horse poor feed. When the animal collapses in battle, García is severely injured, and dies days later. After Almanzor forces her son, count Sancho García, to flee to Lantarón, his mother plots his death as well. She has a poisoned draught prepared-for him, but Sancho is forewarned and insists that his mother drink it instead. She does so and dies, and Sancho then defeats Almanzor in battle.[10]

Ferdinand I of León

Elvira of Castile, Queen of León 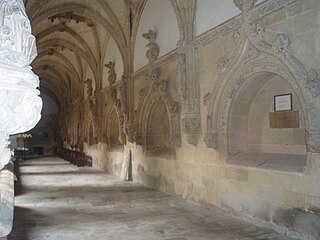 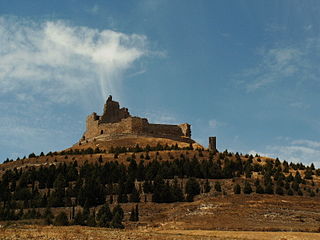