From Wikipedia, in a visual modern way
For the real conspiracy during Cicero's consulship in 63 BC, see Catilinarian conspiracy.

The so-called first Catilinarian conspiracy was an almost certainly fictitious conspiracy in the late Roman Republic. According to various ancient tellings, it involved Publius Autronius Paetus, Publius Cornelius Sulla, Lucius Sergius Catilina, and others. Ancient accounts of the alleged conspiracy differ in the participants; in some tellings, Catiline is nowhere mentioned. Autronius and Sulla had been elected consuls for 65 BC but were removed after convictions for bribery. New consuls were then elected. The supposed goal of the conspiracy was to murder the second set of consuls elected for 65 BC and, in their resulting absence, replace them.

Almost all modern historians believe the conspiracy is fictitious and dismiss claims thereof as merely slanderous political rumours. The core of the legend, a plot by the two consuls-elect for 65 BC to kill and usurp the consuls, is dismissed as inconceivable. The participation of others, such as Catiline, is rejected as inconsistent with their immediately following political actions; most claims of participation are believed to be discrediting retrojections introduced in the aftermath of the real Catilinarian conspiracy in 63 BC. 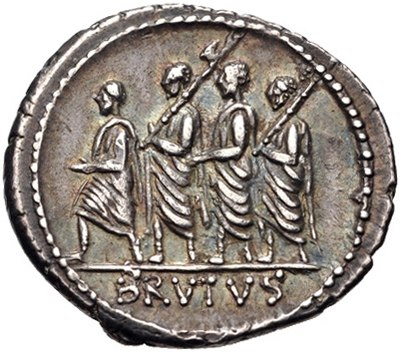 The Roman Republic was a form of government of Rome and the era of the classical Roman civilization when it was run through public representation of the Roman people. Beginning with the overthrow of the Roman Kingdom and ending in 27 BC with the establishment of the Roman Empire, Rome's control rapidly expanded during this period—from the city's immediate surroundings to hegemony over the entire Mediterranean world.

Publius Autronius Paetus was a politician of the late Roman Republic who was involved in the conspiracy of Catiline. Lucius Sergius Catilina, known in English as Catiline, was a Roman politician and soldier. He is best known for instigating the Catilinarian conspiracy, a failed attempt to violently seize control of the Roman state in 63 BC.

A 1st century AD bust of Cicero, one of the principal sources alleging Catiline's involvement in this fictitious conspiracy. He later exposed, as consul, the real Catilinarian conspiracy in 63 BC.

The inciting incident for the conspiracy was the election of two consuls-designate for 65 BC, Publius Autronius Paetus and Publius Cornelius Sulla, followed by the invalidation of the results. They were accused and convicted of ambitus, electoral corruption, preventing them from entering office and expelling them from the senate.[1] The two other leading candidates, Lucius Manlius Torquatus and Lucius Aurelius Cotta, were elected in a second election and then slated to enter office on the first day of 65 BC in their place. Catiline supposedly became involved when his consular candidacy was rejected by the presiding magistrate for the comitia in 66 BC, Lucius Volcatius Tullus.[2]

Cicero's account survives, although scattered over a number of speeches. At various times and contexts, he claimed there was a conspiracy:[3][4]

Sallust describes a conspiracy developed in December 66 BC involving Autronius, Catiline, and Piso to make Autronius and Catiline consuls by violence on 1 January 65 BC. His description then includes a further conspiracy to murder many senators and assume the consulship on 5 February 65 BC after the discovery of the first plot.[9]

Livy's account survives only in the Periochae.[10] The summary thereof states only that "those who had been running for consul and had been condemned for bribery" (Autronius and Sulla) conspired to usurp the consulship.[11]

Suetonius' account has no mention of Catiline and instead has Autronius conspiring with Julius Caesar (later dictator) and Marcus Licinius Crassus (later Caesar's ally) to butcher the replacement consuls and have Crassus made dictator with Caesar as magister equitum. Caesar would help by cooperating with Piso to raise an insurrection in Hispania and elsewhere.[2] Crassus and Caesar would then restore Autronius and Sulla to their vacated consulships.[12]

Cassius Dio gives no mention of Crassus and Caesar, relating instead that Autronius, Sulla, Catiline, and Piso conspired to make Autronius and Sulla consuls.[13]

In the aftermath of the rumours, the senate voted to provide bodyguards for the consuls and to establish an inquiry; the inquiry, however, was vetoed by one of the tribunes. When Catiline was tried for corruption later in 65 BC, one of the sitting consuls he was alleged to have planned to murder, Lucius Manlius Torquatus, appeared in his defence and indicated his disbelief of the rumours.[14][15]

Cicero, on his part, however, continued to slander Catiline through following years with the allegations, due both to his personal enmity with Catiline and his desire to "magnify his achievement" in suppressing Catiline's revolt in 63 BC.[16]

The Catilinarian conspiracy was an attempted coup d'état by Lucius Sergius Catilina (Catiline) to overthrow the Roman consuls of 63 BC – Marcus Tullius Cicero and Gaius Antonius Hybrida – and forcibly assume control of the state in their stead.

Publius Autronius Paetus was a politician of the late Roman Republic who was involved in the conspiracy of Catiline. 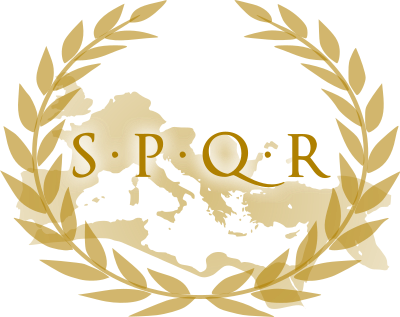 In ancient Roman law, ambitus was a crime of political corruption, mainly a candidate's attempt to influence the outcome of an election through bribery or other forms of soft power. The Latin word ambitus is the origin of the English word "ambition" which is another of its original meanings; ambitus was the process of "going around and commending oneself or one's protégés to the people," an activity liable to unethical excesses. In practice, bringing a charge of ambitus against a public figure became a favored tactic for undermining a political opponent.

Lucius Volcatius Tullus was a Roman politician who became consul in 66 BC alongside Manius Aemilius Lepidus. 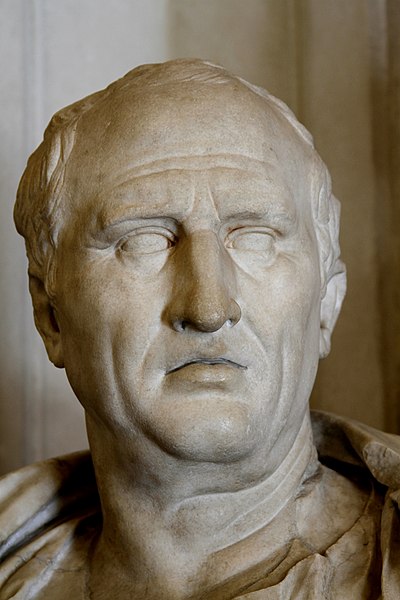 Marcus Tullius Cicero was a Roman statesman, lawyer, scholar, philosopher, and academic skeptic, who tried to uphold optimate principles during the political crises that led to the establishment of the Roman Empire. His extensive writings include treatises on rhetoric, philosophy and politics, and he is considered one of Rome's greatest orators and prose stylists. He came from a wealthy municipal family of the Roman equestrian order, and served as consul in 63 BC.

Titus Livius, known in English as Livy, was a Roman historian. He wrote a monumental history of Rome and the Roman people, titled Ab Urbe Condita, ''From the Founding of the City'', covering the period from the earliest legends of Rome before the traditional founding in 753 BC through the reign of Augustus in Livy's own lifetime. He was on familiar terms with members of the Julio-Claudian dynasty and a friend of Augustus, whose young grandnephew, the future emperor Claudius, he exhorted to take up the writing of history. 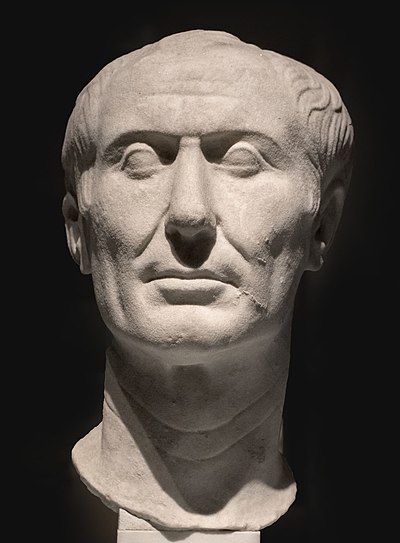 Gaius Julius Caesar, was a Roman general and statesman. A member of the First Triumvirate, Caesar led the Roman armies in the Gallic Wars before defeating his political rival Pompey in a civil war, and subsequently became dictator from 49 BC until his assassination in 44 BC. He played a critical role in the events that led to the demise of the Roman Republic and the rise of the Roman Empire.

Marcus Licinius Crassus was a Roman general and statesman who played a key role in the transformation of the Roman Republic into the Roman Empire. He is often called "the richest man in Rome." 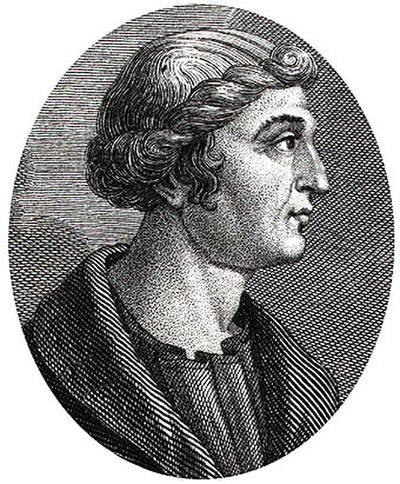 Lucius Cassius Dio, also known as Dio Cassius, was a Roman historian and senator of maternal Greek origin. He published 80 volumes of the history on ancient Rome, beginning with the arrival of Aeneas in Italy. The volumes documented the subsequent founding of Rome, the formation of the Republic, and the creation of the Empire, up until 229 AD. Written in Ancient Greek over 22 years, Dio's work covers approximately 1,000 years of history. Many of his 80 books have survived intact, or as fragments, providing modern scholars with a detailed perspective on Roman history.

Modern historians today, almost universally, doubt that the conspiracy ever existed and view it as fictitious.[17][10][18][19][20] Older scholarship had varied views, positing various theories: The conspirators could have been agents of a shadowy anti-Pompeian faction or a motley group of opportunists.[2] Catiline may have been an ally of Torquatus, Sulla, or have been unrelated, engaging only tangentially because of the trial of Gaius Manilius in December 66 BC.[21] But since the 1960s, basically all historians now reject the conspiracy's historicity.[22]

Robin Seager in a 1964 article proposes means by which the legend was developed:[23] Cicero sought to discredit Catiline prior to his consulship by associating him to a supposed plot that came to nothing; he later excised Publius Sulla from his descriptions when he needed to defend him. Another tradition attempted something similar by putting Caesar's name into the mix.[24] Of the possibility of a core conspiracy by the two consuls-designate unseated for corruption, Seager writes "it is inconceivable that there was such a plot... they could have had no hope of recovering the consulship even for a single day".[25] As to Suetonius' claims, beyond the fact that Crassus and Caesar could have had no part in a non-existent conspiracy, they would have had no reason to join one: the two would have had nothing to gain and everything to lose. As to Piso's involvement, Seager dismisses any such involvement as implausible given that he soon received the honour of an early governorship in Spain from the senate.[26]

Erich S. Gruen in a 1969 article similarly dismisses the ancient descriptions as "hopelessly muddled by propaganda and invective", explaining that after the actual Catilinarian conspiracy in 63 BC, "it was in any politician's interest to associate his enemies with Catiline" and that later stories embellished this by inventing a role for Caesar and Crassus after Caesar's polarising consulship in 59 BC.[21] Catiline may have engaged in some demonstrations related to a riotous trial – that of Manilius – at the end of 66 BC, but there is little reliable evidence of a connection between those demonstrations and any attempts to overturn the consular elections.[27] 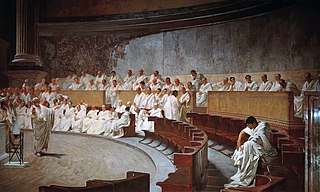