The following is a list of notable deaths in September 2022.

Mahmoud Ahmadzadeh was an Iranian engineer and politician.

The Kammerzell House is one of the most famous buildings of Strasbourg and one of the most ornate and well preserved medieval civil housing buildings in late Gothic architecture in the areas formerly belonging to the Holy Roman Empire.

Jakez Cornou was a French historian, ethnologist, and author. He lived in Bigouden and pursued passions in history, ethnography, and heritage of the Bretons. He was a co-founder of the newspapers Cap Caval and Pays de Quimper en Cornouaille. He also directed the publishing house Éditions Sked and was a member of the collective Les Plumes du paon, which sought to promote literature in the Pays Bigouden.

John Evan Dapcevich was an American politician in the state of Alaska. 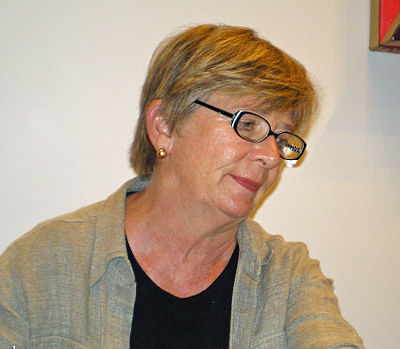 Barbara Ehrenreich was an American author and political activist. During the 1980s and early 1990s, she was a prominent figure in the Democratic Socialists of America. She was a widely read and award-winning columnist and essayist and the author of 21 books. Ehrenreich was best known for her 2001 book Nickel and Dimed: On (Not) Getting By in America, a memoir of her three-month experiment surviving on a series of minimum-wage jobs. She was a recipient of a Lannan Literary Award.

Bait and Switch: The (Futile) Pursuit of the American Dream is a 2006 book by Barbara Ehrenreich.

Dancing in the Streets

Dancing in the Streets

Dancing in the Streets: A History of Collective Joy is a book authored by Barbara Ehrenreich.

John Robert Gamble Jr. was an American professional baseball shortstop who played thirteen games for the Detroit Tigers in two seasons of Major League Baseball (MLB) from 1972 to 1973. He batted and threw right handed and served primarily as a pinch runner.

The Detroit Tigers are an American professional baseball team based in Detroit. The Tigers compete in Major League Baseball (MLB) as a member of the American League (AL) Central division. One of the AL's eight charter franchises, the club was founded in Detroit as a member of the minor league Western League in 1894 and is the only Western League team still in its original city. They are also the oldest continuous one name, one city franchise in the AL.

Benjamin Harwood Jr., better known as Bo Harwood, was an American sound mixer, sound editor, sound engineer, music supervisor, composer, and songwriter. Harwood's sound work gained attention in the 1970s after his work on films directed by John Cassavetes. In the 1990s and 2000s, Harwood worked primarily as a mixer for several television series, including Felicity, and Six Feet Under.

Felicity is an American drama television series created by J. J. Abrams and Matt Reeves and produced by Touchstone Television and Imagine Television for The WB. Brian Grazer and Ron Howard were executive producers through Imagine Entertainment.

Albert Hasibuan was an Indonesian politician. He served on the People's Representative Council from 1977 to 1997.