Light rail transit (LRT) is a form of passenger urban rail transit characterized by a combination of tram and rapid transit features. While its rolling stock is more similar to a traditional tram, it operates at a higher capacity and speed, and often on an exclusive right-of-way. In many cities, light rail transit systems more closely resemble, and are therefore indistinguishable from, traditional underground or at-grade subways and heavy-rail metros.

The Red Line, also known as Route 201, is a light rail transit (LRT) line in Calgary, Alberta, Canada. Partnered with the Blue Line, and future Green Line it makes up Calgary's CTrain network. Following its initial approval in 1976, the Red Line opened in 1981, running from Anderson station in the southeast into downtown. The Red Line has gone through a series of expansions, which bring it to its current design. The Red Line services the northwest quadrant and south end of the city beginning at Tuscany station, runs through the downtown core on 7th Avenue, then proceeds southbound where it terminates at Somerset–Bridlewood station. The section of track running along 7th Avenue is shared with the Blue Line. Future expansion of the Red Line includes rerouting the downtown section below 8th Avenue, which would allow the operation of five-car trains, further increasing capacity. 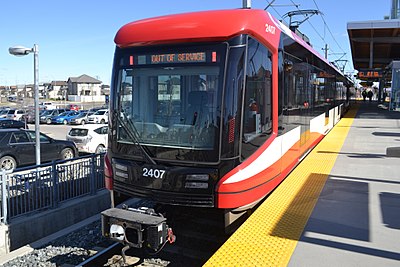 CTrain is a light rail rapid transit system in Calgary, Alberta, Canada. Most of the network functions as a light metro, though in the free-fare zone that runs through the downtown core the Red and Blue lines operate like an urban tramway. The CTrain began operation on May 25, 1981 and has expanded as the city has increased in population. The system is operated by Calgary Transit, as part of the Calgary municipal government's transportation department. In 2021, the system had a ridership of 35,522,200, or about 164,400 per weekday as of the second quarter of 2022, making it one of the busiest light rail transit systems in North America. About 45% of workers in Downtown Calgary take the CTrain to work.

Dalhousie station is a CTrain light rail station in Dalhousie, Calgary, Alberta, Canada. Also located adjacent to Varsity Estates. It opened on December 15, 2003, as part of a 2.8 km extension of the Northwest line, and was the terminal station of the NW line until June 14, 2009. 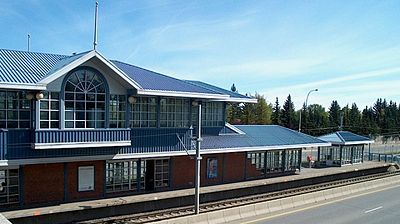 University station is a CTrain light rail station on the Northwest Line in Calgary, Alberta, Canada, opened on September 7, 1987 as the part of the original line's terminus station until August 30, 1990. The station is located in the median of Crowchild Trail, just north of 24 Avenue NW and east of the University of Calgary grounds.

MAX Orange, also known as Route 303 or the North Crosstown BRT, is a bus rapid transit line in Calgary, Alberta. Part of Calgary Transit's MAX network, it largely travels east-west along 16 Avenue N and north-south along 52 Street NE. It connects CTrain stations on the Red and Blue lines to the northwest and northeast quadrants of Calgary.

The station has two tracks and a single island platform. Located to either side of the station is Crowchild Trail, with pedestrian overpasses connecting the station to either side of the road. To the southwest are the bus stations and a park and ride with 950 stalls. To the northeast are a Calgary Co-op and Brentwood Mall,[1] and to the southwest there is the University Research Park.[2]

The station itself is located in Varsity, with the communities of Varsity, Brentwood, and Charleswood being served by the station.[2]

When the line was extended, Robert LeBlond from the firm LeBlond Partnership was asked to design the new station building. The transit designers knew that the Brentwood extension would be the last extension for many years, so they wanted an impressive design. LeBlond designed the building to resemble a grain elevator. The station building won the Portland Cement Award of Excellence for its use of concrete, and the Alberta Association of Architects successfully nominated the building for inclusion in the Chronicle of Significant Alberta Architecture.[3]

Crowchild Trail is a major expressway in western Calgary, Alberta. The segment from the 12 Mile Coulee Road at the edge of the city to 16 Avenue NW is designated as Highway 1A by Alberta Transportation. The road is a critical north-south link in West Calgary for both downtown bound traffic and travel between the two quadrants of the city it passes through. Although planned to be one single freeway from Glenmore Trail to the city limits, the route is currently divided by a section of slow moving arterial road with four signalized intersections between 24 Avenue and Memorial Drive. This causes the freeway in the northwest to separated from the freeway south of the Bow River. Filling the gap and making the whole route a minimum six lane freeway is currently planned for construction beyond 2027.

Varsity is an established neighbourhood in the Northwest quadrant of Calgary, Alberta. It was developed in the 1960s and early 1970s on a plateau to the north of the Bow River valley, and is primarily composed of Single-detached dwellings on wide lots. The neighbourhood comprises three major areas: Varsity Acres, Varsity Village, and Varsity Estates. Varsity is bounded on the north and east by Crowchild Trail, on the west by the Bow River, and on the south by 32nd Avenue NW. It borders the neighbourhoods of Silver Springs and Bowness on the west side, and both Montgomery and the University of Calgary campus on the south side. The easternmost portion of Varsity contains the University of Calgary Research Park.

Charleswood is a residential neighbourhood in the northwest quadrant of Calgary, Alberta. It is located east of Crowchild Trail and the University of Calgary. It borders the Nose Hill Park to the north and the Confederation Park to the southeast.

A grain elevator is a facility designed to stockpile or store grain. In the grain trade, the term "grain elevator" also describes a tower containing a bucket elevator or a pneumatic conveyor, which scoops up grain from a lower level and deposits it in a silo or other storage facility.

Brentwood station was proposed in a study by transit consultants Hawley Simpson and John F. Curtin entitled Transit for Calgary's Future. The study proposed a northwest-southeast line from Brentwood to Haysboro (the equivalent of Heritage station).[4]

Brentwood station was created as part of a 0.8 kilometres (0.50 mi) extension that was opened on August 13, 1990. It would be the northwest terminus until 2003, when Dalhousie station was opened.[3]

In May of 2010, the federal government announced that they would be cooperating with the municipal government to extend the station's platform to accommodate the new four-car trains.[6]

In September 2020, the station's pedestrian bridges underwent a renovation, which included concrete rehabilitation and lighting upgrades along the stairs, ramps, and the bridge, and new handrails and guardrails. Renovation ended in winter of 2021.[7] 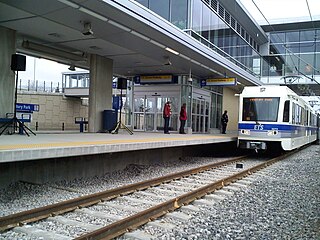