Awadh Khrees (Arabic: عوض خريص); born 5 January 1991) is a Saudi Arabian professional footballer who plays as a right back for Al-Jabalain.[1][2]

The Saudi Crown Prince's Cup was the Saudi Arabian annual cup competition. It was the oldest domestic football competition in Saudi Arabia, its first edition was held in 1956–57, but was not crowned from 1975 until 1990. The competition consists of teams from the top two tiers of Saudi league football, as well as the competition runs from August until February.

The 2018 King Cup, or The Custodian of the Two Holy Mosques Cup, was the 43rd edition of the King Cup since its establishment in 1957, and the 11th under the current format. It started on 3 January and concluded with the final on 12 May 2018. The winner qualified for the 2019 AFC Champions League group stage. 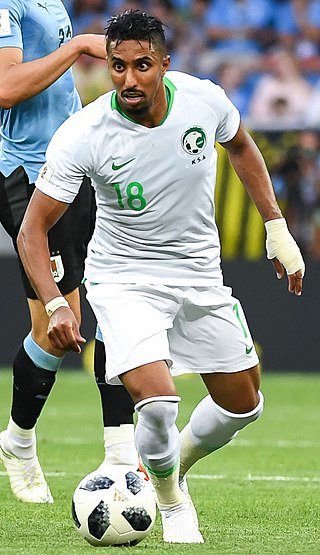